The lands that came within the power of the lord of the MacIains varied with the fortunes of the clan, but the core lands extend from the Point of Ardnamurchan in the west to the western end of Loch Shiel in the east.  To the northeast lay the lands of the Clanranald MacDonalds; those to the south and across the Sound in Mull were Clan Macleans’. 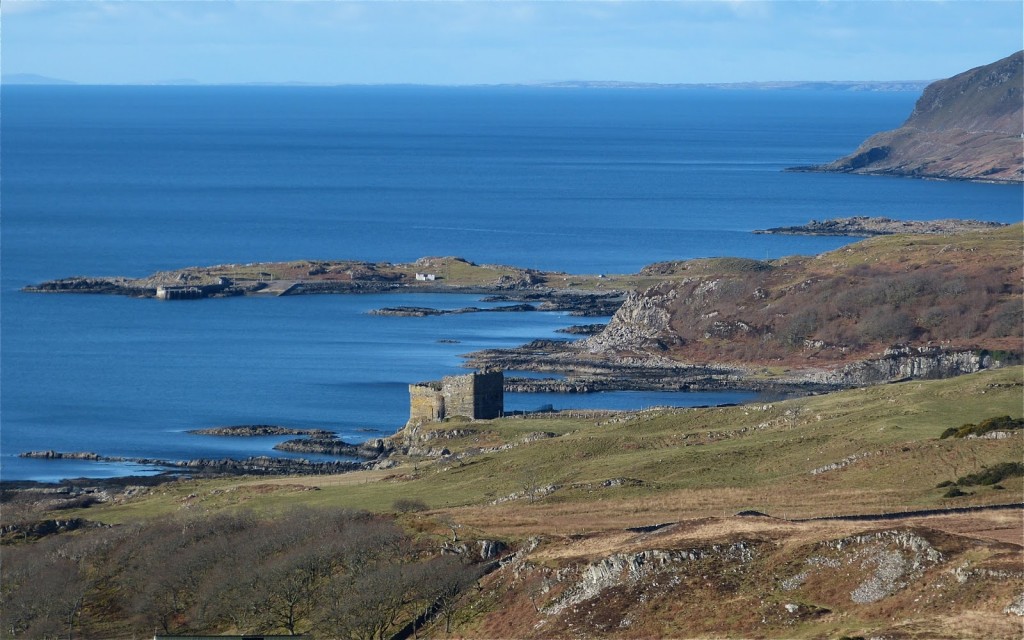 Ardnamurchan had already been inhabited for millennia.  The earliest evidence we have of man’s settlement of the area are shell middens which were excavated on the tiny island of Risga in Loch Sunart, almost opposite where Glenborrodale Castle stands today.  These are dated to the mesolithic, to the mid-5th millennium BC, and were left by small groups of nomadic hunter-gatherers.

There is evidence of a large population during neolithic times.  Three impressive chambered cairns are to be found within a few miles of Mingary Castle – Greadal Fhinn in Ormsaigmore, Cladh Aindreis at Swordle Bay, and Cladh Chiarain at Camas nan Geall.  The remains of bronze age hut circles are scattered across the peninsula, and iron age forts are found along its coasts.

By the middle of the first century AD the peninsula was probably inhabited by people of Pictic origin, but it was steadily colonized by Scots who came from Ireland.  They created the Kingdom of Dalriada, and brought their language, Gaelic.

After St Columba founded his monastery on Iona in the 6th century, his travels brought him to West Ardnamurchan.  He is said to have landed at Camas nan Geall, where a fresh spring on the hillside is named after him, while a cave on the north coast, near Swordle, was his place of retreat.

Two centuries later the Vikings pulled their longships onto Ardnamurchan’s beaches, named many of the coastal features, and buried a chief in a secluded bay – the only Viking boat burial on mainland Scotland was excavated at Swordle Farm in 2010 by the Ardnamurchan Transitions Project.  The Norsemen settled and intermarried with the local population, but their allegiance remained with the Norse kings of the isles.  By 1158 the Norse-Gaelic leader Sommerled had defeated the Norse overlords and created the Kingdom of the Isles.  Iain Sprangach, Clan MacIain’s founder, was the great-great grandson of Sommerled.