How Did the Ordinary MacIains Live? 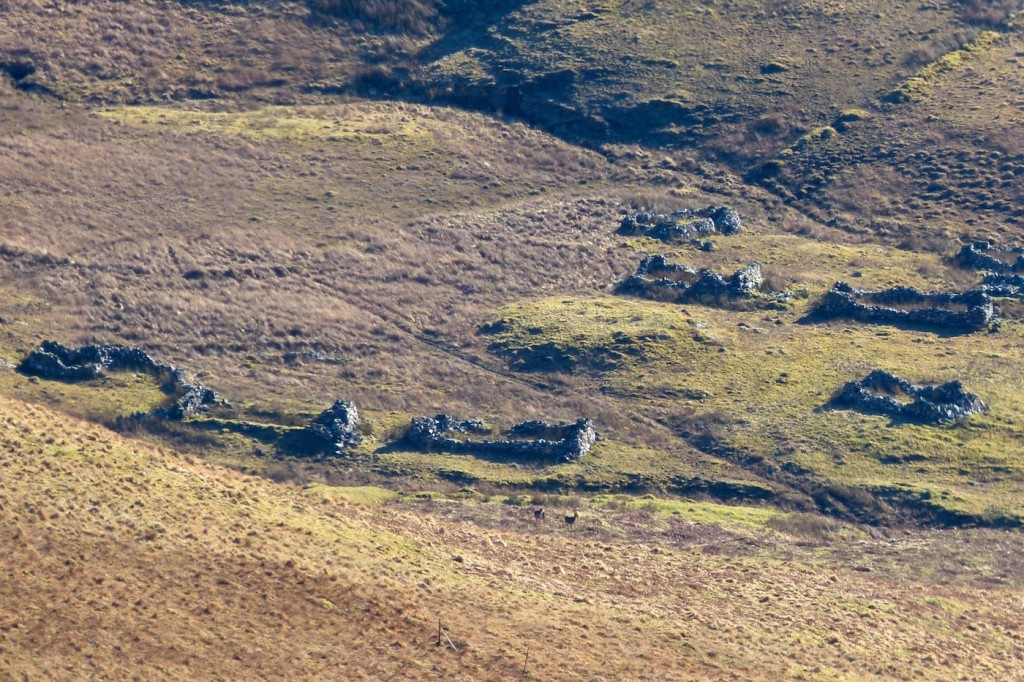 Bourblaige, a village cleared of its inhabitants in 1828

Such evidence as we have for the day-to-day life of the ordinary member of Clan MacIain comes from the archaeological remains that we find all over Ardnamurchan and from a few other sources, such as written records and maps.  Of one thing we can be reasonably certain – a typical MacIains lived his or her life out in a small village called a ‘clachan’.  Visualising a MacIain clachan is helped by the fact that, early in the 19th century, many of Ardnamurchan’s clachans were cleared to make way for sheep farms and, because the buildings were made of local stone, their ruins are left on the landscape.  The houses of MacIain clachans may not have been built of stone, but they wouldn’t have been much different, so looking at the remains of a clachan like Bourblaige, above, gives us a good idea of life in MacIain times. 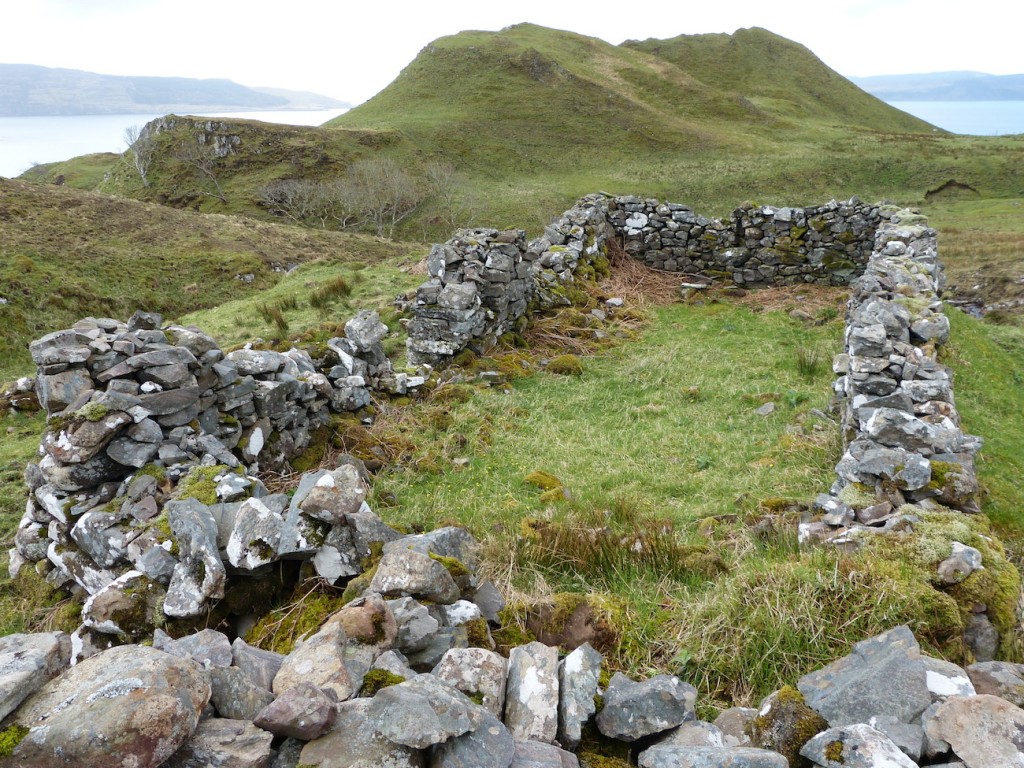 One of the houses of the Bourblaige clachan.

A clachan consisted of a few, very simple dwelling houses, with farm outhouses such as byres and barns, and kailyards, walled areas for growing vegeatables, occupied by a population many of whom were related. The people lived in single-storey buildings made of local materials including stone, wood, mud, turf, reed and heather – of which the two-roomed blackhouses are the best known.

The photo above shows a Bourblaige house.  typically, they are about 10m long and 5m across, and did not have gabled ends.  The door  is usually in the middle of one of the long sides – on the left here – and the fire was in the centre of the room, the smoke finding its way out through the thatch.  While Bourblaige was fairly sophisticated in having separate byres for the animals, earlier houses – and certainly those of the poorer people – would have been smaller, and the accommodation would have been shared with the family’s animals.

One of the problems of understanding the life of people in a clachan is that structures in MacIain times, such as houses and byres, were built of materials which have left no trace, such as wood for the roofs and peat turfs for the walls.  To add to historians’ difficulties, many of these impermanent structures may have been destroyed on a regular basis, the materials, often saturated with soot from the fire, used as fertilizer on the fields, and a new house built either on the old site or a different one. It was only relatively late on, in the 18th and 19th centuries, that estate owners began to insist that their tenants build houses using stone for their walls. 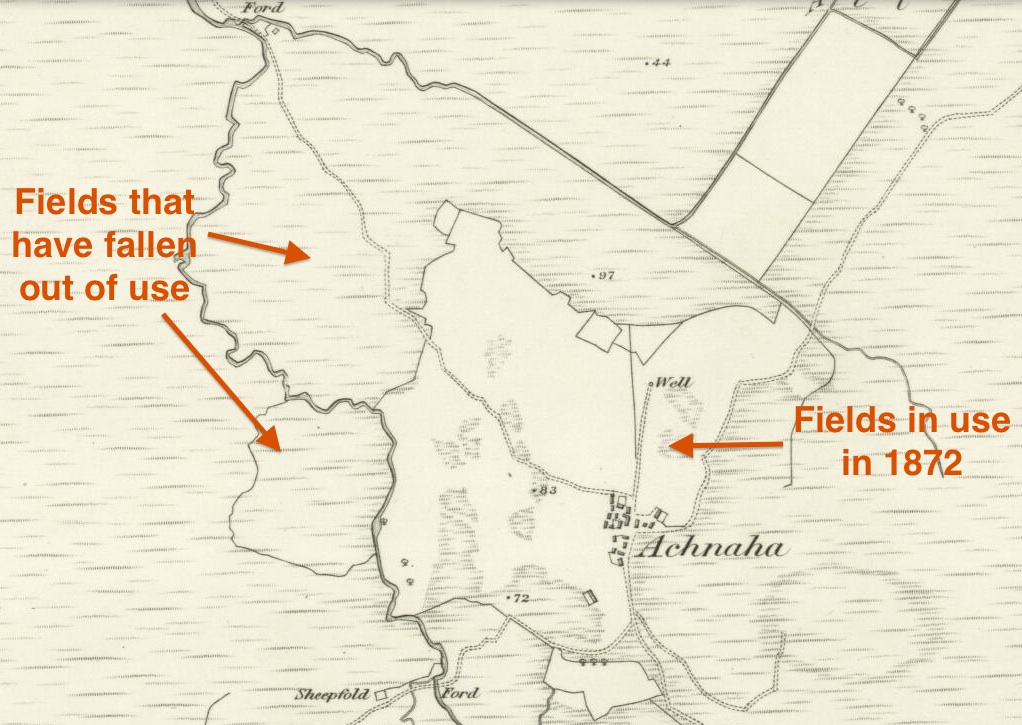 The village of Achnaha, surveyed in 1872

This map of Achnaha, taken from the OS 6″ map surveyed in 1872, illustrates the arrangement that is perceived as being typical of a clachan – a nucleated settlement, with the houses close packed but often at random angles to each other, and usually sited on the poorest ground, surrounded by its fields. However, there is some evidence that this is not the only arrangement of agricultural landholding, that at some periods the houses were more dispersed and the land held privately rather than in common. In Bourblaige the houses were further apart, but earlier settlements may have had the houses still more dispersed, with individual or, sometimes, small family groupings within a walled enclosure. Here on Ardnamurchan we have evidence that some families lived in farmsteads which were some distance from the clachans, a good example being the remains of a farm at Lochan na Gruagaich, near Loch Mudle. The farming system used by the MacIain farmer probably changed through time, though the land was always treated as a communal asset allocated by the clan chief or his tacksman.

Lazy beds seen in a field in Ormsaigmore.

Good arable land was always scarce, so at times very small areas were pressed into use. Even when reasonably large areas of flat ground were available, open fields were divided into strips about 6m wide, enabling it to be shared between the families. The earth was banked into ridges (rigs) with ditches (runs) between, a system known as runrig. This arrangement aided drainage, and thickened the soil for the crops which were grown along the top of the rig, which was fertilised using manure or seaweed. In some places, these strips were allocated by the drawing of lots on a regular timetable. They would be worked by the family for as little as one year and then reallocated, so the better fields were available to all. The strips were often S-shaped, a feature which was dictated by the use of the very unwieldy, wooden old Scotch plough. The system was much criticised by later ‘improvers’, since there was little incentive to develop the soil of a strip, as this would benefit future as much as the present users.

Large areas of good land are uncommon in most highland areas, so the small, irregular patches between rock outcrops, where the unwieldy Scotch plough could not be used, were organised into strips about 2m wide called lazy beds or feannagan. These strips were fertilized with bracken or, better, by applying seaweed, and could be very fertile. They were worked using hand tools such as the caschroim, a type of spade. 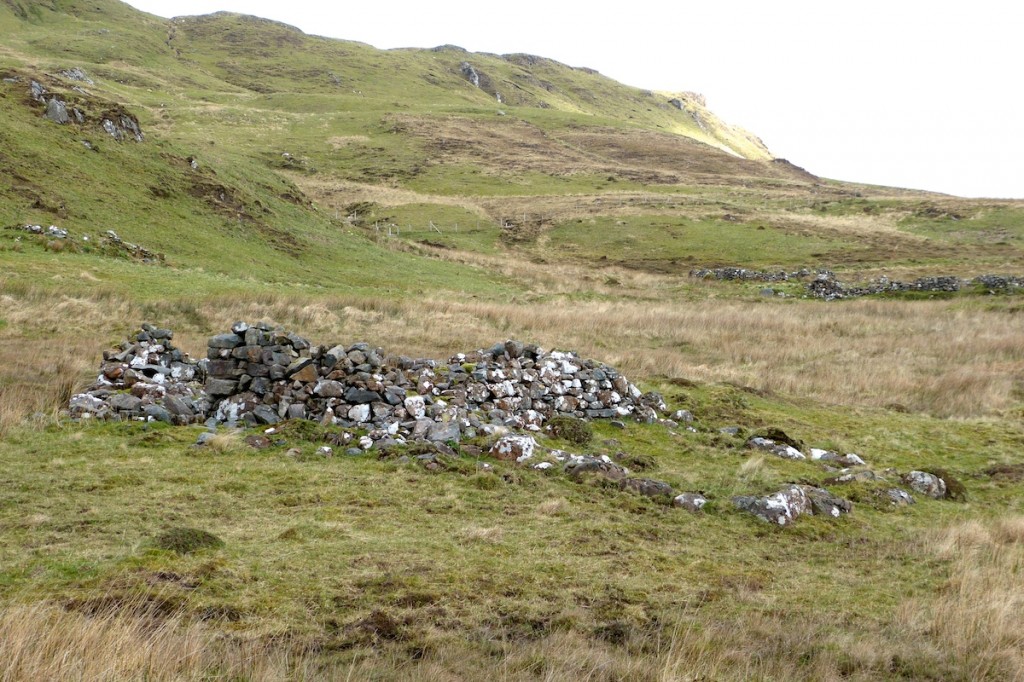 House with kailyard at Bourblaige.

In MacIain times the main crops would have been oats and barley, with vegetables grown in kailyards close to the house.  Hunting and fishing would have provided protein, shellfish were readily available along the shoreline, and smoking food over the fire enabled it to be set aside for winter. Despite this, a poor harvest would have resulted in famine, with the younger children dying first.  The most important development in Highland agriculture came too late for the MacIains: after about 1755, the widespread planting of potatoes provided hugely improved nutrition, so the population soared. This meant that existing land had to be subdivided more and more – which caused a disaster when blight came to the Highlands and Islands in 1846. 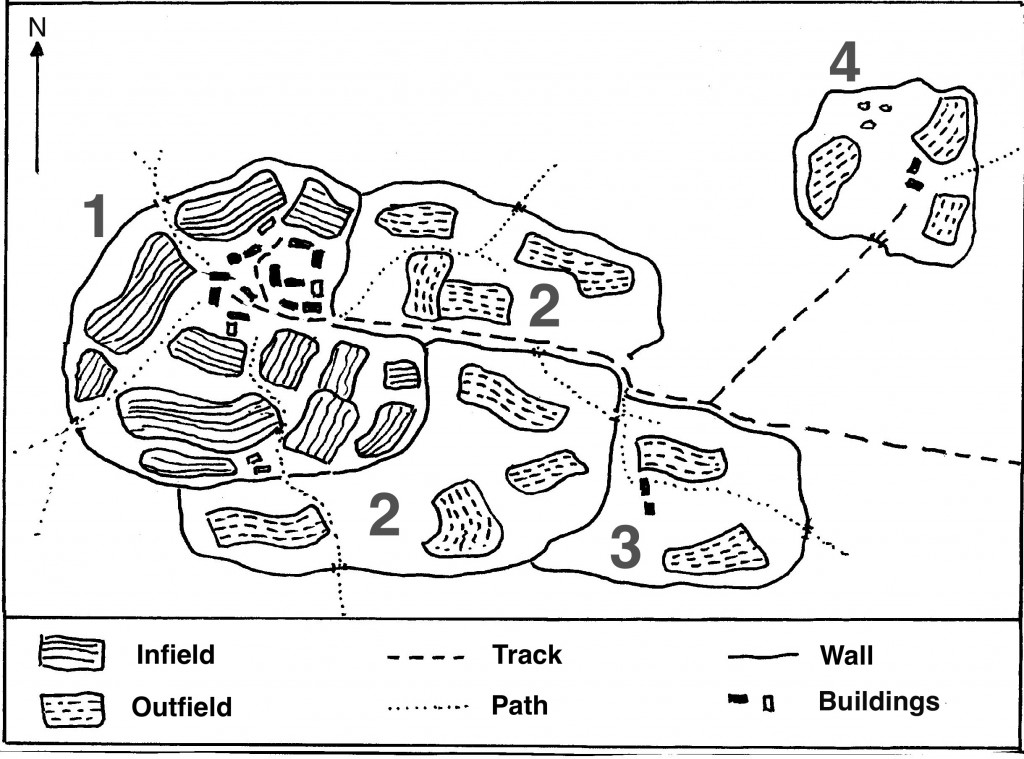 A map of a clachan.

This map, adapted from Robert Dodgshon’s book, gives a vivid idea of the layout of a clachan and how it may have developed.  The area 1, within a wall called a header dyke (a stone or peat wall), enclosed the buildings of the clachan and the well-fertilized infield arable fields.  These fields were liable for assessment by the tacksman(Gaelic fear-talc) who acted on behalf of the clan chief. Developed beyond this boundary, 2, and enclosed by an outer dyke, were one or more outfield areas. The fields in the outfield were fertilized by the animals being brought in and contained within them by temporary dykes and were not assessed for rent purposes. With a rising population, further areas, 3, could be developed and settled. Outside these areas lay the common grazings, upon which each family had a right to graze a fixed number of animals, a souming. The area 4 was originally a shieling (Gaelic airigh, see next paragraph) but this, too, could be settled on a permanent basis. 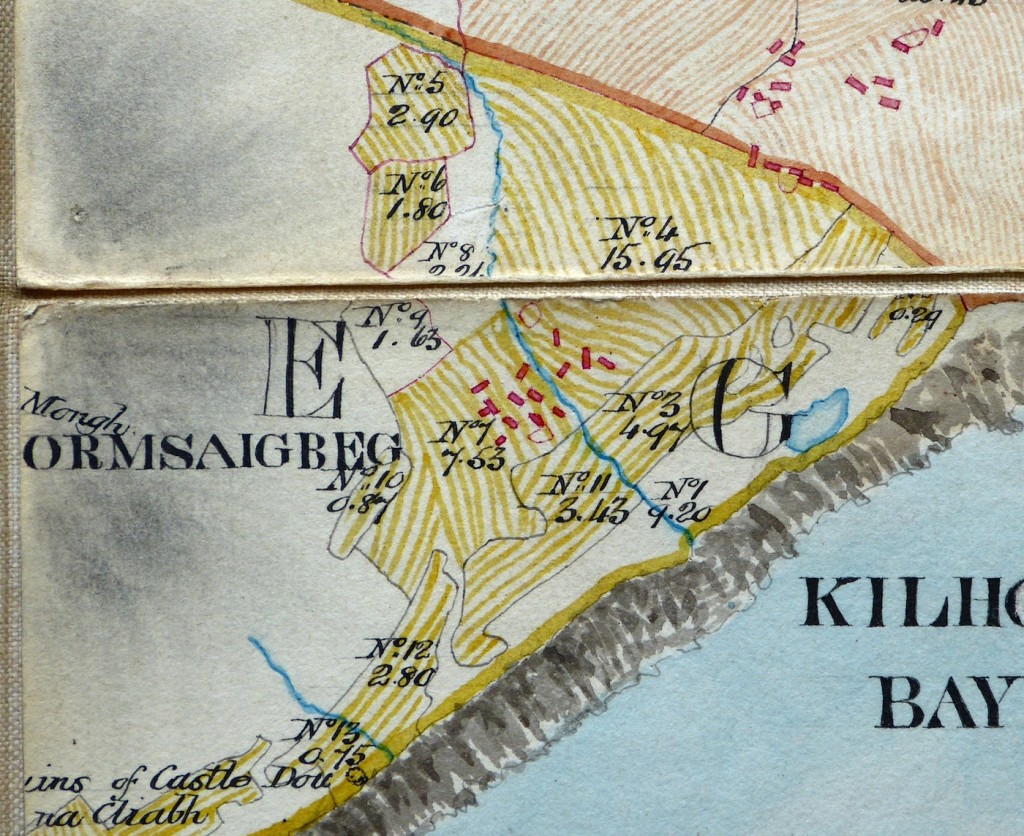 This arrangement can be seen in Bald’s map of Ormsaigbeg, dated 1806. The buildings of the clachan, in red, are surrounded by its fields.  When Ormsaigbeg was reorganised in the early years of the 19th century, the clachan was destroyed and its stone sussed to build the walls which separated the newly-established crofts, to the extent that the clachan site today shows no sign of any structures. 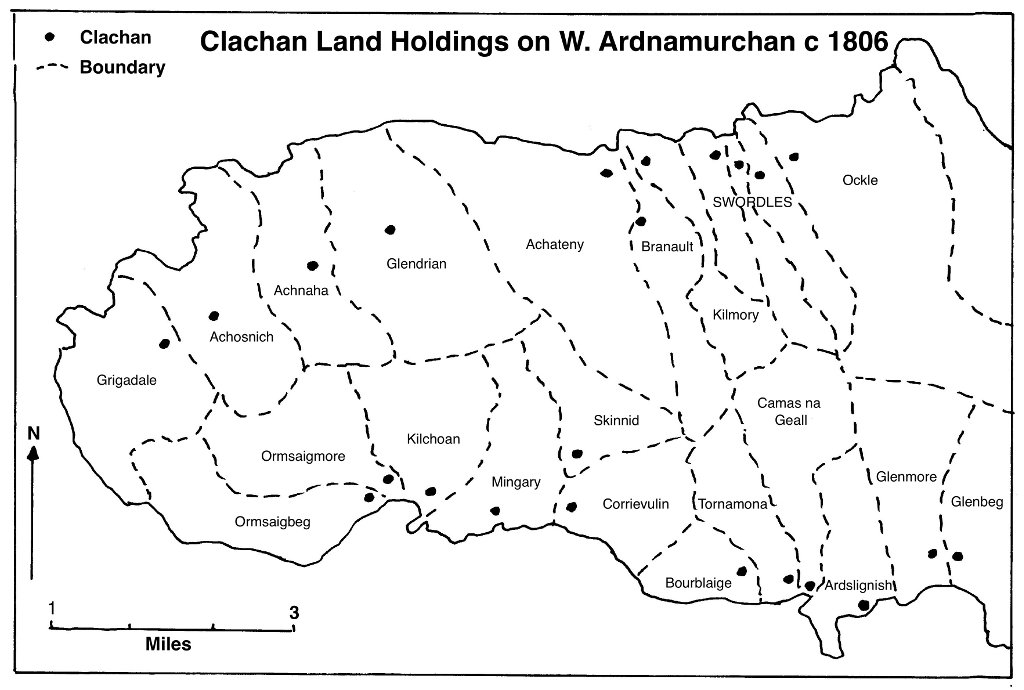 This map,  based on Bald’s map of 1806, shows the clachan lands of western Ardnamurchan. As well as the better land immediately around the settlement, each clachan had rights on a large area of hill land, the ‘common grazings’, upon which to keep its animals. In summer, the cattle and sheep were taken to a distant part of the common grazings where the women and children stayed in ‘shielings’ and made products such as cheese, while the men worked the arable land for crops of barley, oats and, later, potatoes. The animals were brought back to the settlement once the crops were harvested, and grazed in the infields to manure them. Many clachans grew up close to the sea, as this provided a good fertilizer in the form of seaweed, and the opportunity to supplement what was otherwise a meagre diet through collecting shellfish along the shore, and fishing. 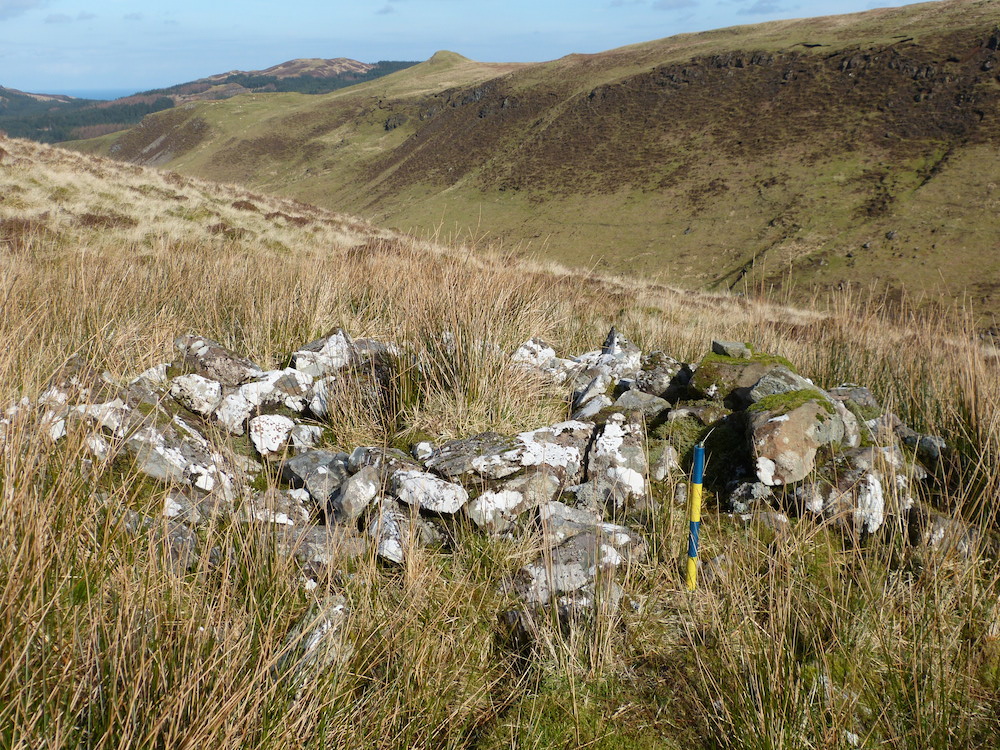 Remains of a shieling hut near Ben Hiant

The  remains of shielings are scattered all across Ardnamurchan.  They are often a mile or so from the clachan, and often sited in very beautiful places.  Commonly, they consist of anything from one to ten circular huts.  Sometimes there is barely a trace of the huts, no more than a slight, rounded rise in the ground, but some were quite substantially built of stone.  This one, close to the B8007 where it passes Ben Hiant, is typical of the better-built, being about 4m in diameter with a single entrance.  It would have been roofed with timber and had a thatch of reeds, grass or bracken, and might have slept one or two people; some of the smaller ones may have been for children, but at this site there is also a much larger hut, big enough to act as a communal meeting place.

All the clachan lands belonged to the clan as a whole.The population paid both allegiance and rent – in kind or in cash – to their clan chief through a tacksman, who also led the menfolk in clan wars. In return, the clan offered its people protection, security, access to land and, in old age and sickness, a sort of ‘social security’. To quote Donnie Fraser, “Underpinning the whole structure of clanship was the almost untranslatable Gaelic term of duthchas, a sort of collective heritage, a concept which guaranteed the right of the people to the land, not necessarily a specific plot of land but a permanent and hereditary stake in the clan territories as the common property of all.”