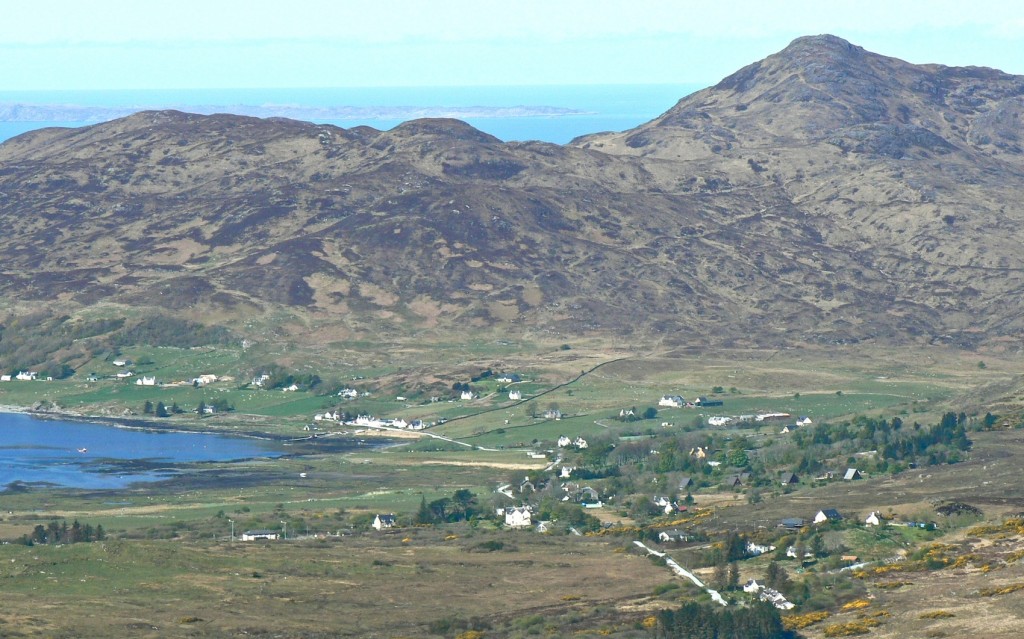 The 230 square kilometres of Ardnamurchan today supports a year-round resident population of about 300, almost all of whom live in small, scattered villages. The largest of these is Kilchoan, with a population of  150, while the smallest is Ockle, population 1.

This is a fraction of the population which the peninsula used to support.  We know that, in the early 19th century, there were over 3,000 people living here, but the reorganisation of the farming land in what is called the Clearances, and the continuing poverty of the area, drove many people away to seek a better life, either in the industrial areas of Scotland or abroad.  The population continued to fall until very recently, but there are now signs of a slow increase. 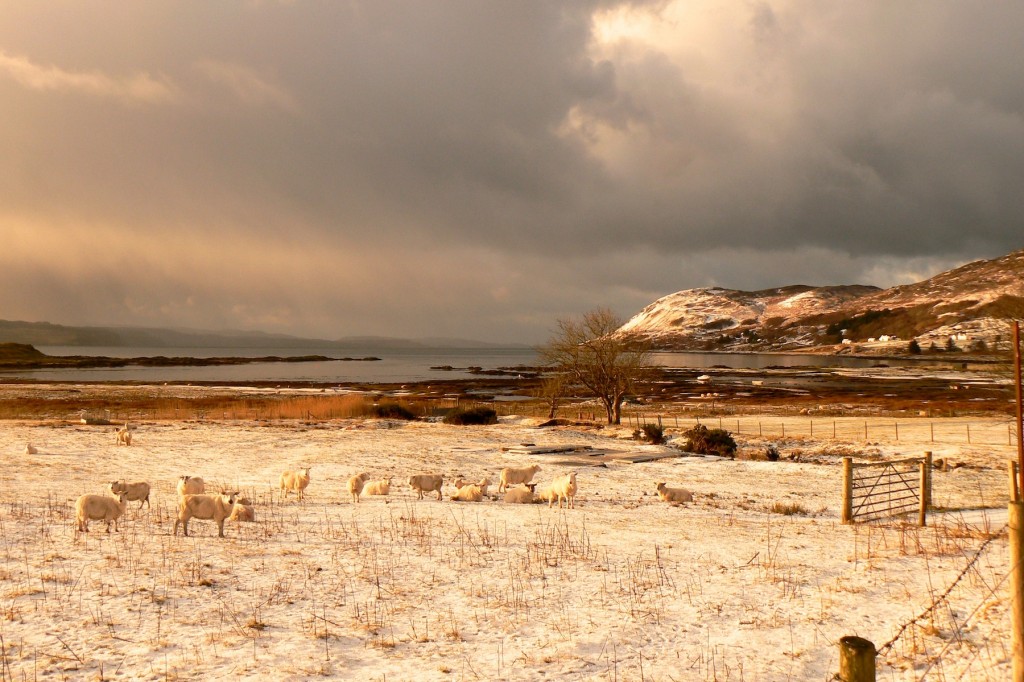 Sheep in a croft field

It is primarily a farming community.  Almost all the villages are crofting communities, so many people, as well as having paid work, also work a one of these small farms.  Crofting is a way of life which is unique to western and northwestern Scotland, and the Hebridean islands.  There’s much more detail of this traditional way of life in a separate section.

One of the biggest employers on the peninsula is the Ardnamurchan Estate.  As well as several workers to care for its cattle, sheep, forestry and other farming interests, it employs people in its office and workshops, in the care for its holiday cottages, and in its expanding biofuel operations.  It is also developing a reputation as one of Scotland’s finest sporting estates, so there is employment for the stalkers who take clients out to hunt, fish or photograph the wildlife.

Another important employer is the salmon farming industry.  There are three salmon farms along Loch Sunart, all of which offer year-round work for up to a dozen local people. 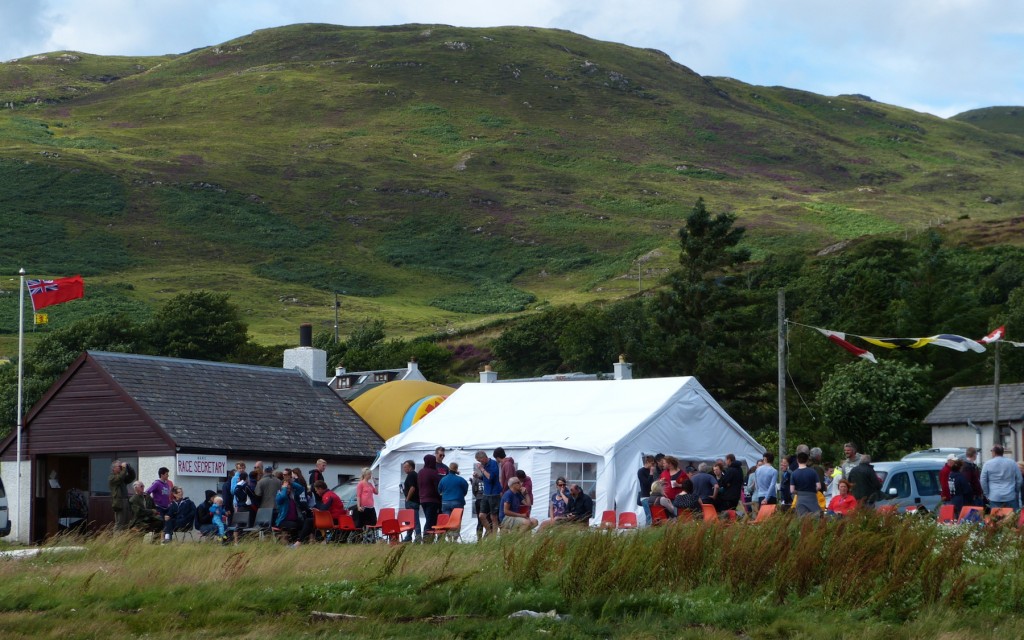 Tourism is making an increasing contribution to the local economy.  Visitors come to Ardnamurchan for the beauty of its landscape, for its exceptional wildlife, and for the many activities it offers, from hill walking to deer stalking on the Estate to participating in annual events such as the regatta (pictured).  Many of those who come here are returning to their family roots: families who left Ardnamurchan many years ago settled in Glasgow, so there are close connections with that city.  Visitors find a wide range of accommodation available, from small, comfy hotels through to secluded camp sites.  Scotland is unusual in that people’s freedom to roam across open countryside, and to ‘wild camp’, are protected by law, so some visitors hike into the wilderness for the duration of their stay.  Ardnamurchan Point Lighthouse which, of the attractions on the peninsula, has the largest number of visitors, records some 20,000 visits per year. 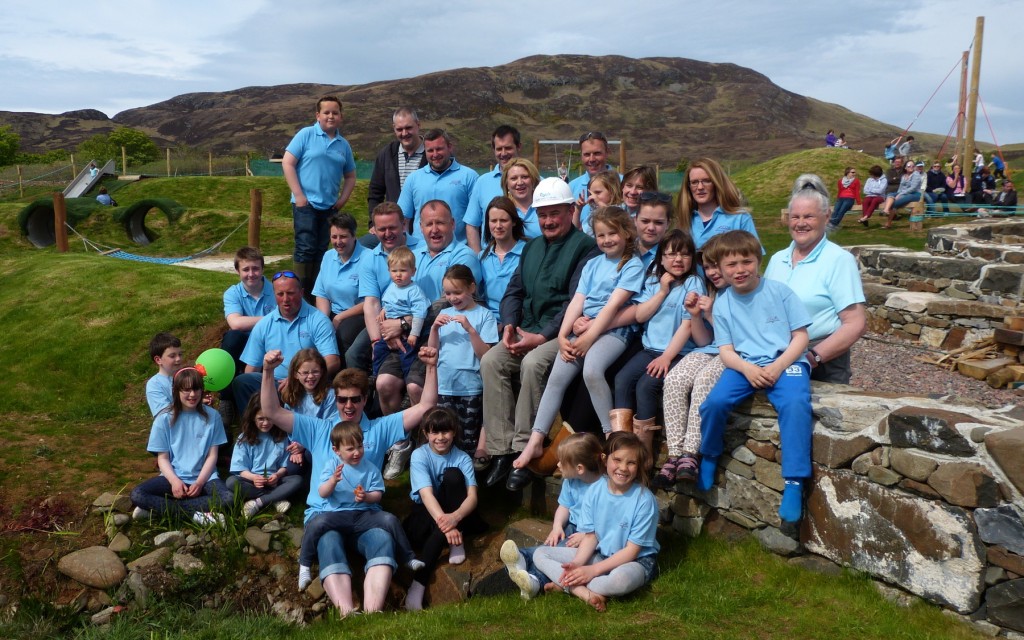 Opening of the Kilchoan Playpark

Kilchoan offers a wide range of services, including a shop which prides itself in selling just about everything, a pub and hotel, a primary school, two churches, a Community Centre which has a cafe, information centre and health centre, a Learning Centre, and fire and coastguard stations. For the children there’s a new play park (pictured), and the Community Centre has a full-size football pitch.