The scattering of the Ardnamurchan MacIains which began early in the 17th century means that it is unusually difficult for its present members to establish their sense of belonging to the clan.  Your situation is further complicated by there being two MacIain septs within Clan MacDonald, those of Ardnamurchan and Glencoe.  While the Ardnamurchan MacIains are descended from the followers of Iain Sprangach, those of Glencoe are descended from Iain Fraoch MacDonald, who was Sprangach’s brother, Angus Og of Islay’s son. 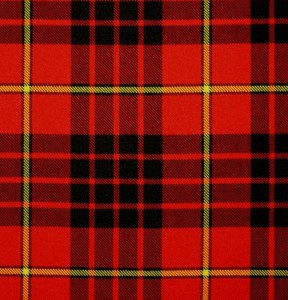 We don’t believe that DNA tests help, particularly in the circumstances of the Ardnamurchan MacIains.  While the MacIain clan is a sept of the much larger Clan Donald, it would always have been a mixed population.  When Iain Sprangach took over the land after Bannockburn, he would have inherited the resident population left behind when the MacDougals fled.  An even more mixed population would have arisen over the centuries from the geographical position of the peninsula of Ardnamurchan: it blocks the main sea route north-south along the west coast of Scotland.  In days when travel by sea was far more important than by land, many people would have come to the peninsula and settled.  What bound this disparate clan together was fealty to the clan chief.

The clan tartan is shown.  As with all these things, we have to exercise some care: the modern concept of tartans didn’t come into being until late in the 18th century, by which time our MacIains were long scattered, but that did not prevent their descendants establishing the tartan and heraldry of the clan.  The tartan of the Ardnamurchan MacIains is a simple but very beautiful one, well suited to the landscape of their home.  Particularly in autumn, these are the colours of Ardnamurchan’s hills. 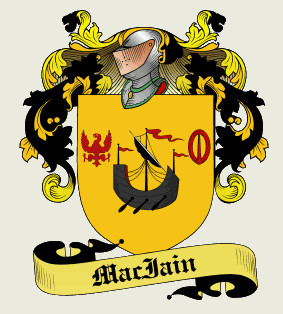 In heraldic terms, the arms of Ardnamurchan Clan MacIain are described as “Or, a lymphad, sails furled and oars in action, Sable, between in fess dexter an eagle, displayed, Gules, and sinister a buckle, of the last.”

‘Or’ means the background is gold. A ‘lymphad’ is an heraldic ship based on the Scottish berlinn, wikipedia entry here. The sails are ‘furled’ and the oars ‘in action’. ‘Sable’ means the lymphad is black. ‘Fess’ is a horizontal division across the shield, and the dexter means to the right, as seen by the carrier from behind, in which there’s an eagle ‘displayed’ – which means the wings are spread. The spreading has a significance it indicates the bearer’s role as protector. ‘Gules’ is red, and refers back to the eagle. ’Sinister’ is left, and that the buckle is ‘of the last’ means it has the same colour as the previous mentioned item, the eagle, i.e., ‘Gules’, red.

Two things stand out.  The ship is a berlinn.  While these were the main mode of passenger and freight transport up and down the Scottish west coast for generations, they were also the man-o’-war of the feuding clans.  The power which Clan MacIain held in the Lordship of the Isles came, in large part, from their holding Mingary Castle, which dominated and controlled the northern entrance to the Sound of Mull.  From the bays on either side of the castle, Port Ur to the east and Port na Spainteach to the west, MacIain fighting ships would have launched both to battle and to intercept passing merchantmen.

The bird on the left is an eagle.  There are two types of eagle flying across Ardnamurchan, the golden and the far larger sea eagle.  The sea eagle is Europe’s largest bird, so big it is sometimes described as a ‘flying barn door’.  As well as a bird of myth and legend, it was the great predator of the Scottish skies, to the extent that, by 1916, it had been hunted to extinction.  It has been reintroduced, and now once again soars across Ardnamurchan. 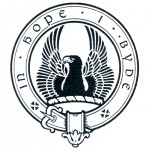 The Badge of the Ardnamurchan MacIains.

The badge of  Clan MacIain is shown here.  It features the heraldic ‘eagle displayed’ and the motto of Clan MacIain, “In Hope I Byde”.  For a clan that has been scattered to the corners of the Earth, yet still has so many members who feel an intense loyalty to it, it’s a truly great motto.