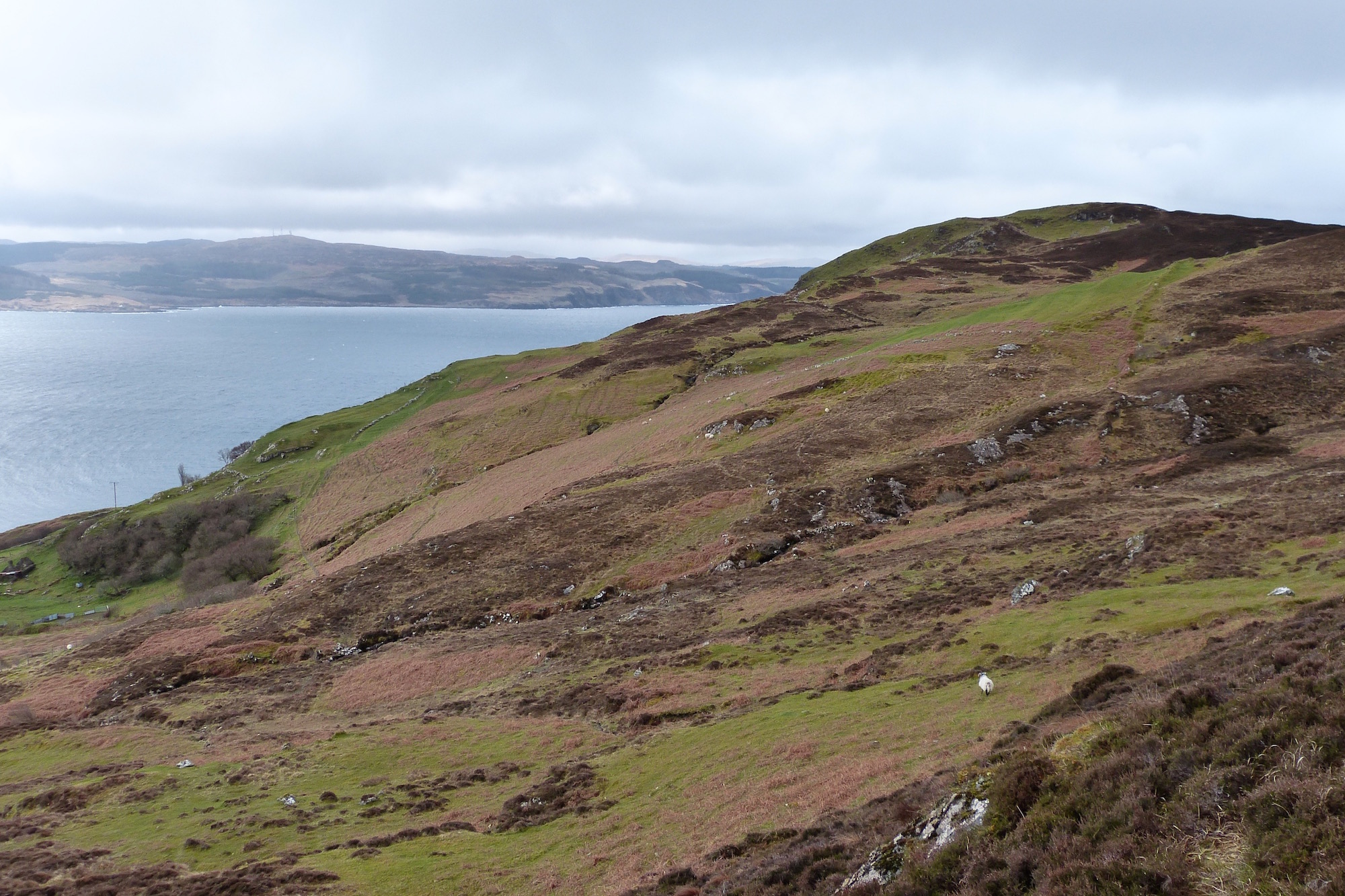 Looking southwest along the back of the Ormsaigbeg croft lands.

This picture was taken from the common grazings at the back of the crofting township of Ormsaigbeg, looking southwest towards a low hill called Maol Buidhe, with the Sound of Mull beyond. At this time of year, before the bracken has grown up, the characteristic stripes of lazy beds can just be seen, evidence of past arable workings.

We know from historical maps that this area was extensively worked early in the 18th century, but had fallen out of use by the beginning of the 19th. It’s evidence that the peninsula once supported a much larger population, but how much bigger…. 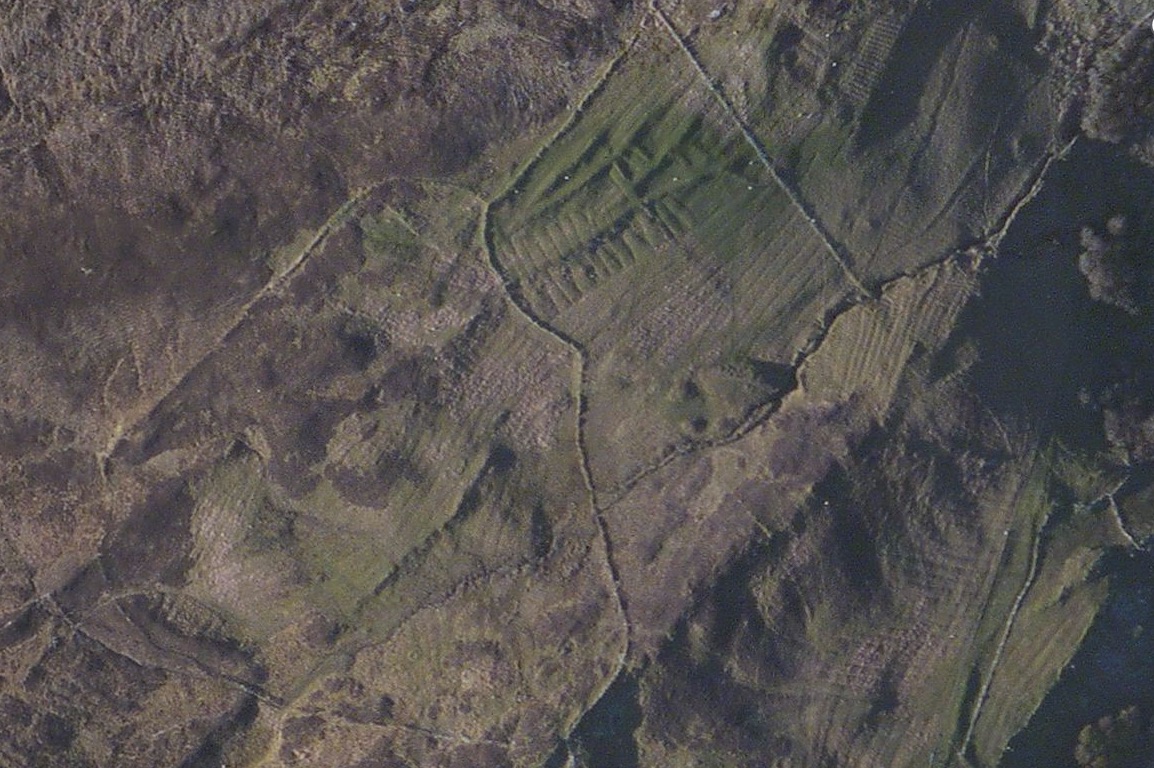 Satellite view of area to the north of Ormsaigbeg

….is suggested by this satellite photo of the same area, where the extent of the workings becomes clearer.  What is fascinating is the variety of types of beds – in some places, such as the bottom right of the picture, different generations of beds run across each other – showing that this area has been worked for many hundreds of years.

Ormsaigbeg – the name has Norse derivations – certainly existed in MacIain times, and it is evidence like this which explains why, in their time, the MacIains were able to raise considerable numbers of men to fight in local conflicts. 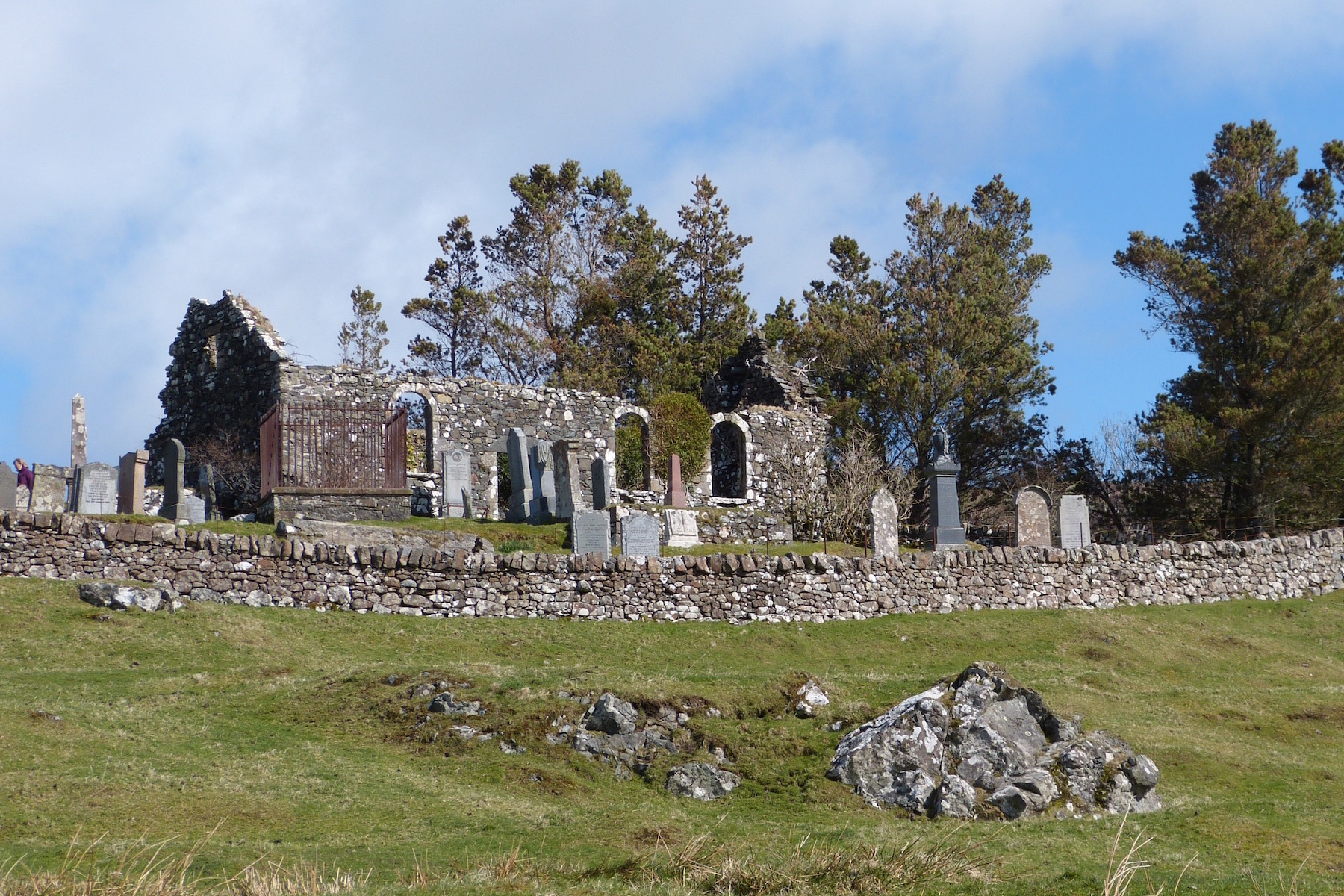 St Comghan’s Church which lies in the village of Kilchoan

St Comghan’s, the 12th/13th century church at which the Clan MacIain used to worship – see history of the church here – is showing further signs of deterioration.  Closed in 1831 when the new parish church was built, the site, including the churchyard with its many graves, is an historical monument, but its maintenance lies in the hands of Highland Council.  During a recent visit, Highland Council officers noticed that the main lintel stone over the entrance door is cracked in two places and is, therefore, potentially dangerous. 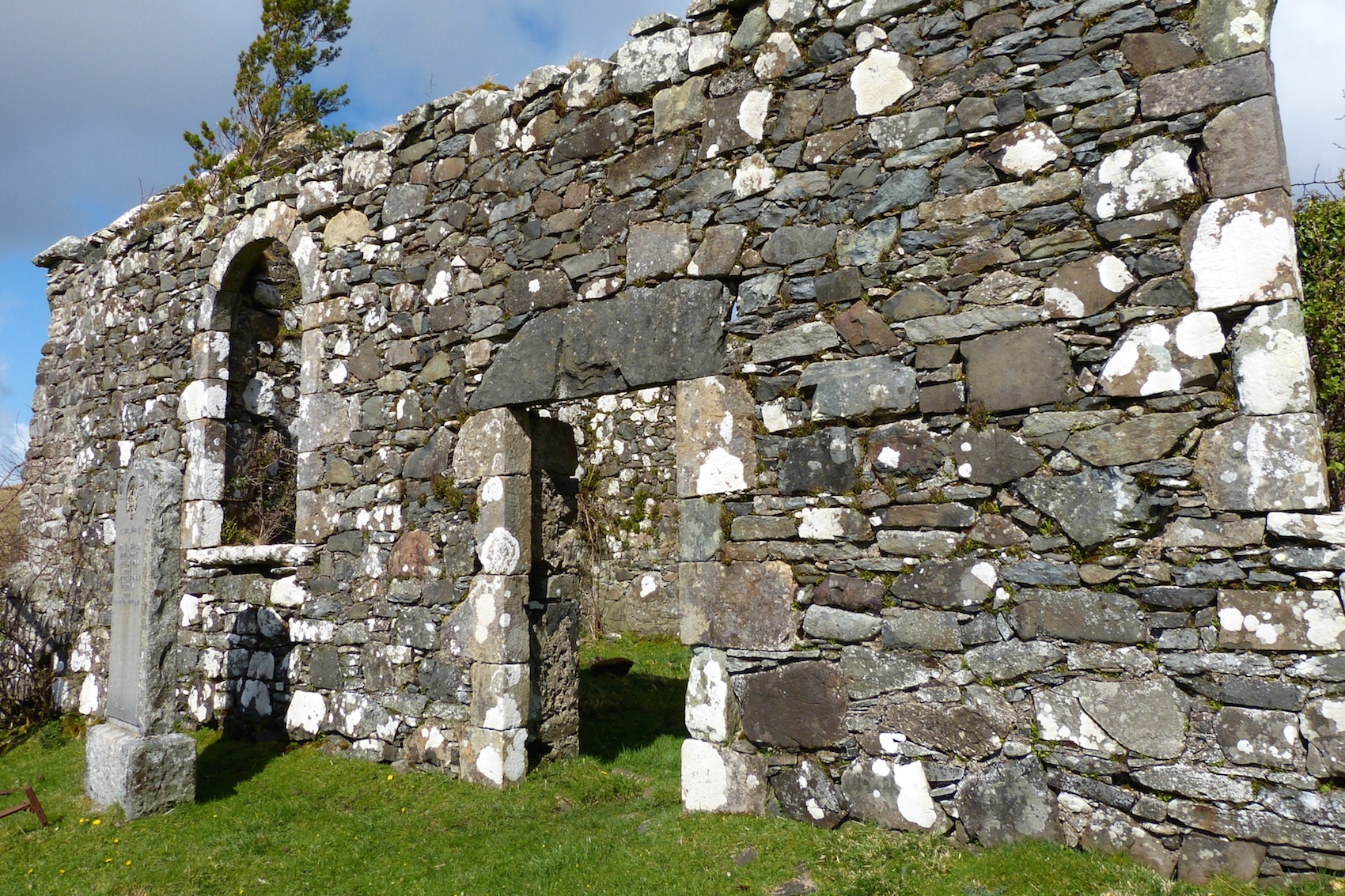 The entrance to the church, with the cracked lintel stone

At a recent meeting, the chairman and secretary of West Ardnamurchan Community Council were advised that the council would be erecting a barrier across the church entrance.  Since this is the only way in, this effectively seals off the interior of the church.

The Ardnamurchan Community Archaeology group, which is currently undertaking a survey of grave stones and grave slabs in the churchyard, has contacted Highland Council expressing its concern that the closure should be as brief as possible so that access can be re-established. 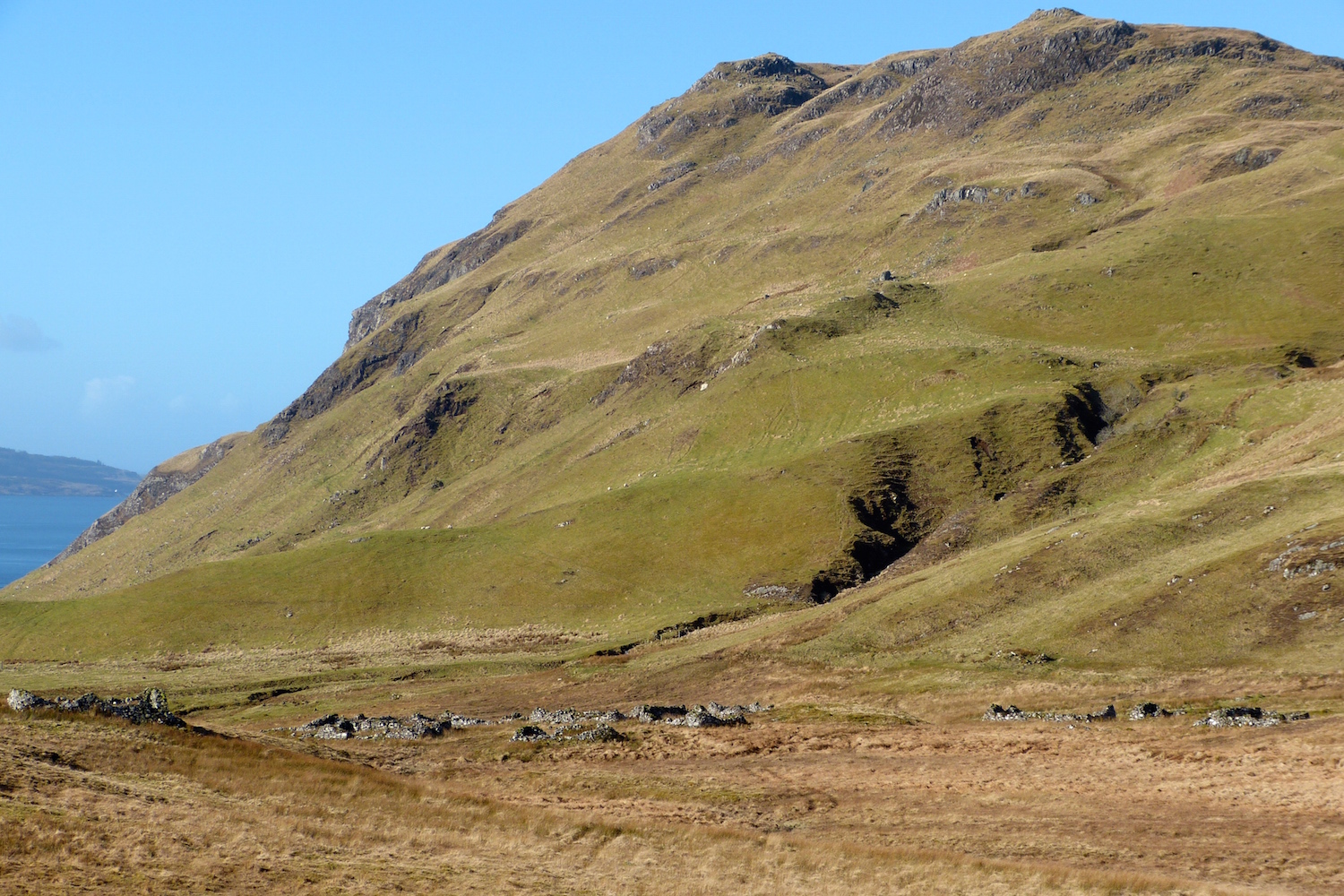 The ruins of Bourblaige lie to the east of Ben Hiant

Bourblaige is one of the clachans cleared during the early part of the 19th century by James Riddell, owner of Ardnamurchan Estate, to make way for an extensive sheep farm.  Today, its fallen houses and byres are hardly visible in the open glen once filled with people.  When it was cleared in 1828, the inhabitants were moved to other clachans, such as the Swordle clachans on the north coast, though many left Ardnamurchan altogether.

Bourblaige’s early history is lost in time, but we do know that it was valued at 2 1⁄2 merk land in 1667, and that in 1686 it was registered to a tenant called John Cameron, so it is probable that the settlement is very much older, and was inhabited in MacIain times.

We visited Bourblaige’s site recently on a beautiful spring morning. The only occupants of the village that day was a large herd of red deer, who moved up into the hills at our approach. 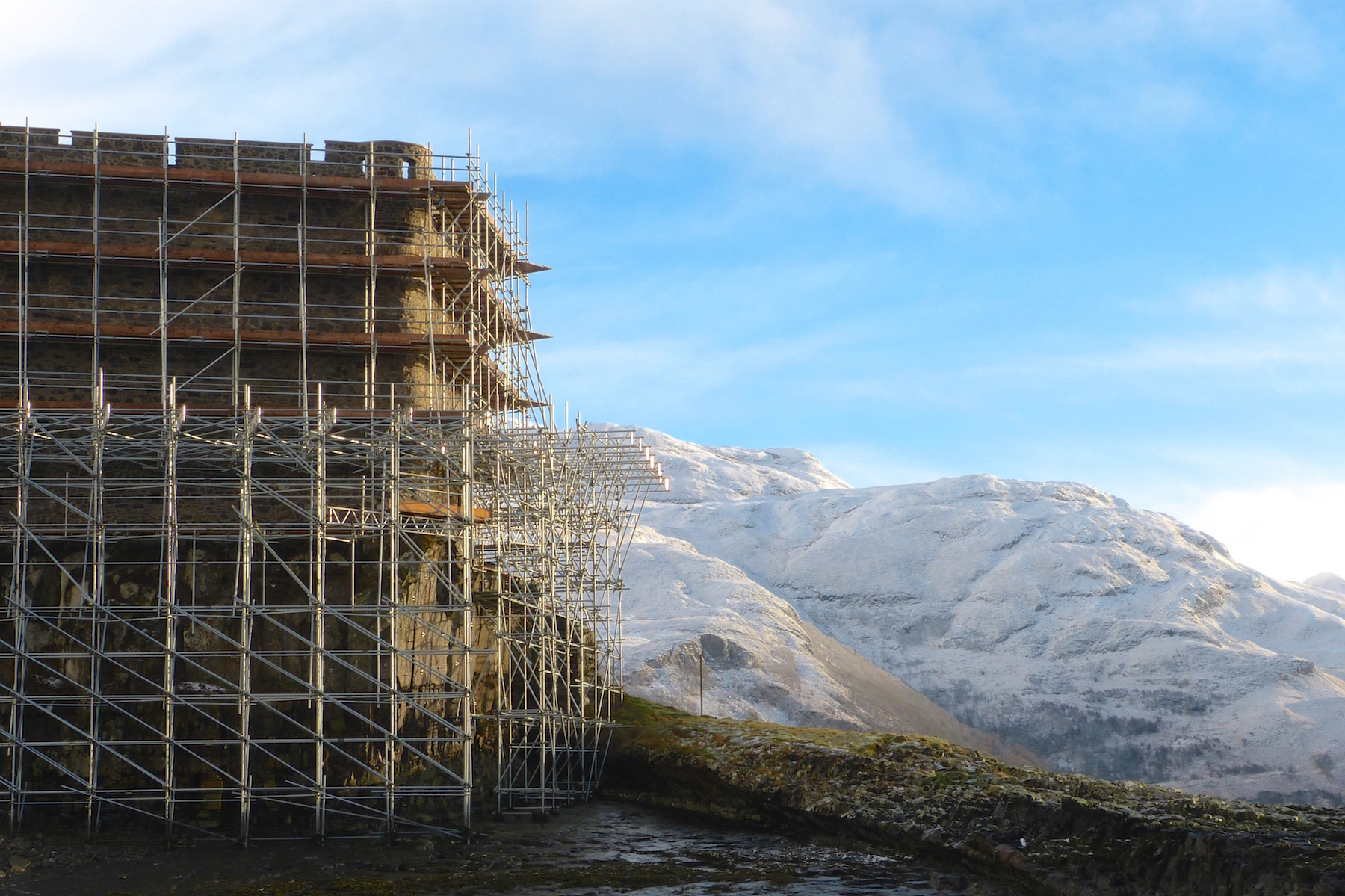 Mingary Castle seen from the west

The western end of Ardnamurchan, protruding as it does into the warm waters of the Atlantic, is more used to gales than snow but, when it comes, even a light fall will transform the landscape.  This picture was taken ten days ago, and the next batch of snow is due over the coming days.  The snow rarely lasts long in our warm climate – but if there is a substantial fall the community can be cut off for days.

Picture shows the south curtain wall of Mingary Castle, with the slopes of Ben Hiant behind.  Work continues on the castle despite some bitter conditions, and completion is still scheduled for early summer.  Almost all repairs have been completed on the outer walls, so the scaffolding should be coming down in the next few weeks, another major landmark on this historic renovation of a mediaeval castle. 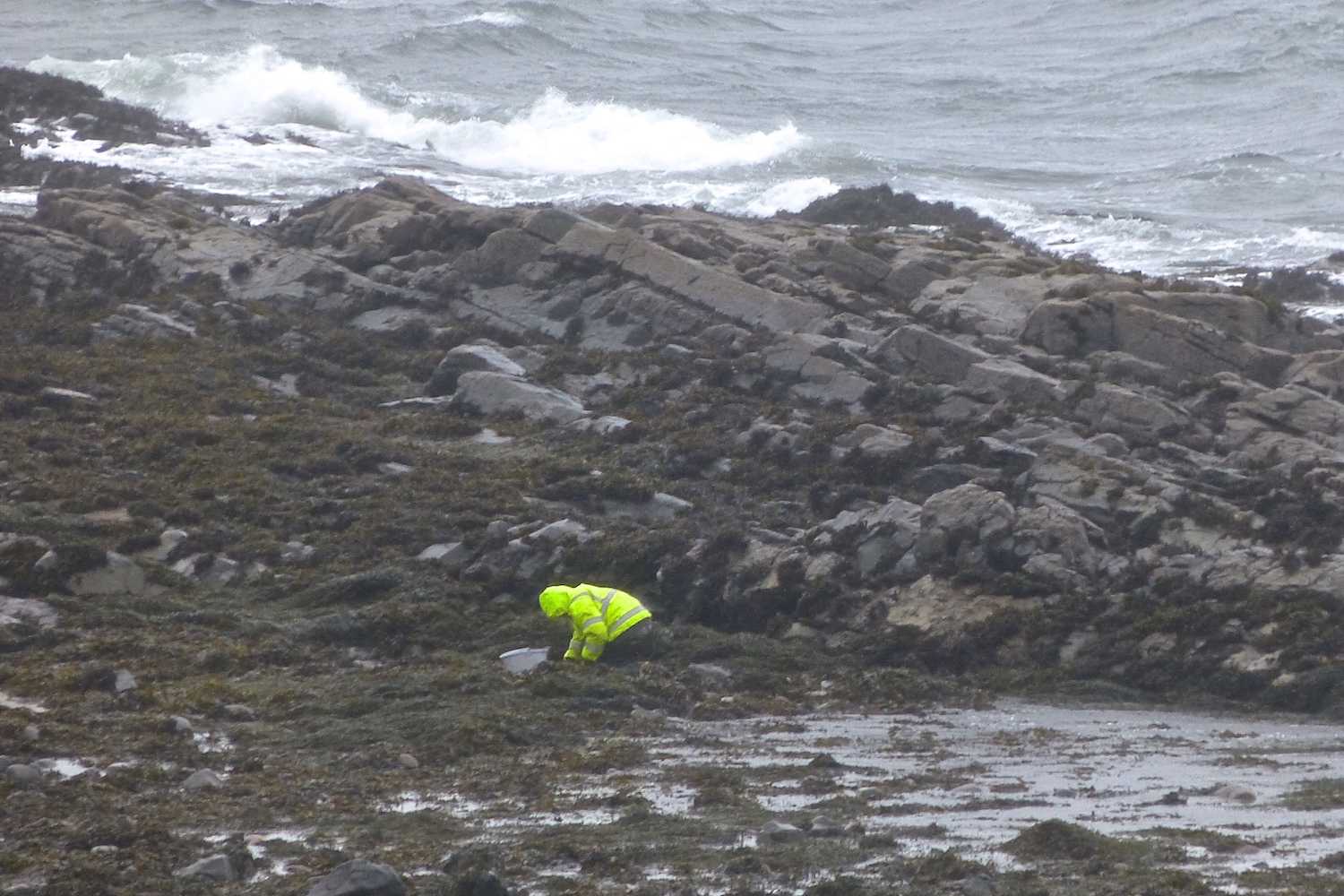 A crofter collects whelks amongst the seaweed along the shoreline.

Since before Christmas, gale after gale has come roaring in from the Atlantic, bringing winds which have gusted up to hurricane force – the highest speed, recorded at Sanna on the night of 8th/9th January, hit 103mph.  Despite the appalling weather, local people have been venturing out onto the rocks along the foreshore to collect wilks, the common periwinkle or winkle Littorina littorea.  This small, edible shellfish is an important export to Mediterranean countries, and can bring a crofter over £100 a bag at the peak of the season – which is around Christmas and the New Year.  Wilks have always been a vital part of the winter diet, with heaps of their shells being found in mesolithic middens. 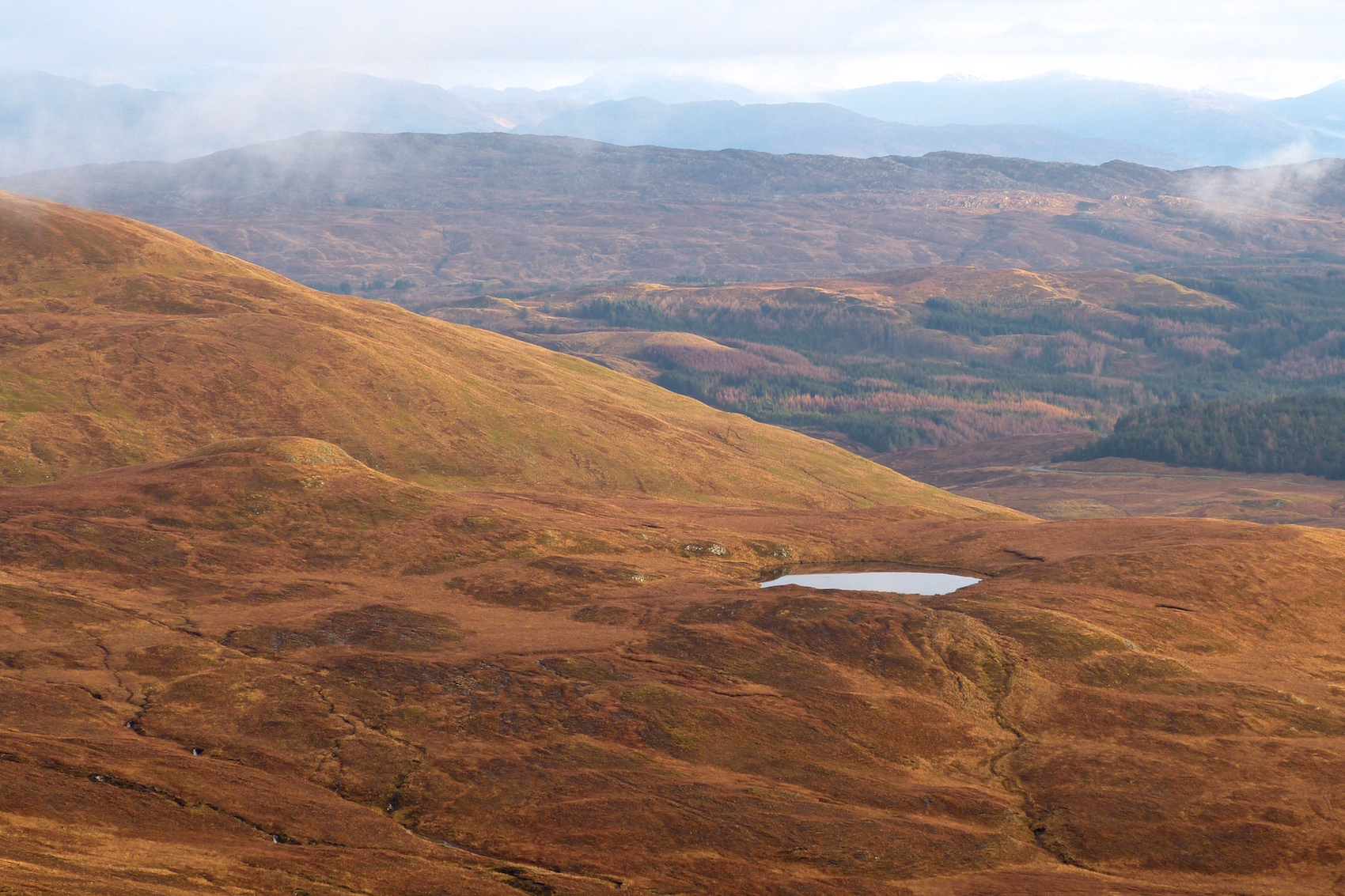 This picture was taken on Christmas Day from the summit of Meall an Tarmachain, ptarmigan hill, looking almost due east.  The lochan is Lochan Tom Mhic Iain, and the small, lumpy hill to its immediate left is Tom Mhic Iain, MacIain’s Knoll.  The hill rising to their left is Beinn an Leathaid, which I take to mean the sloping hill.

I don’t know why this small hill is named after the clan which held Ardnamurchan for so long, but it’s obviously a very special place.

As can be seen, the colours in the hills at this time of year are stunning – if the sun is shining, which it certainly did on Christmas Day. 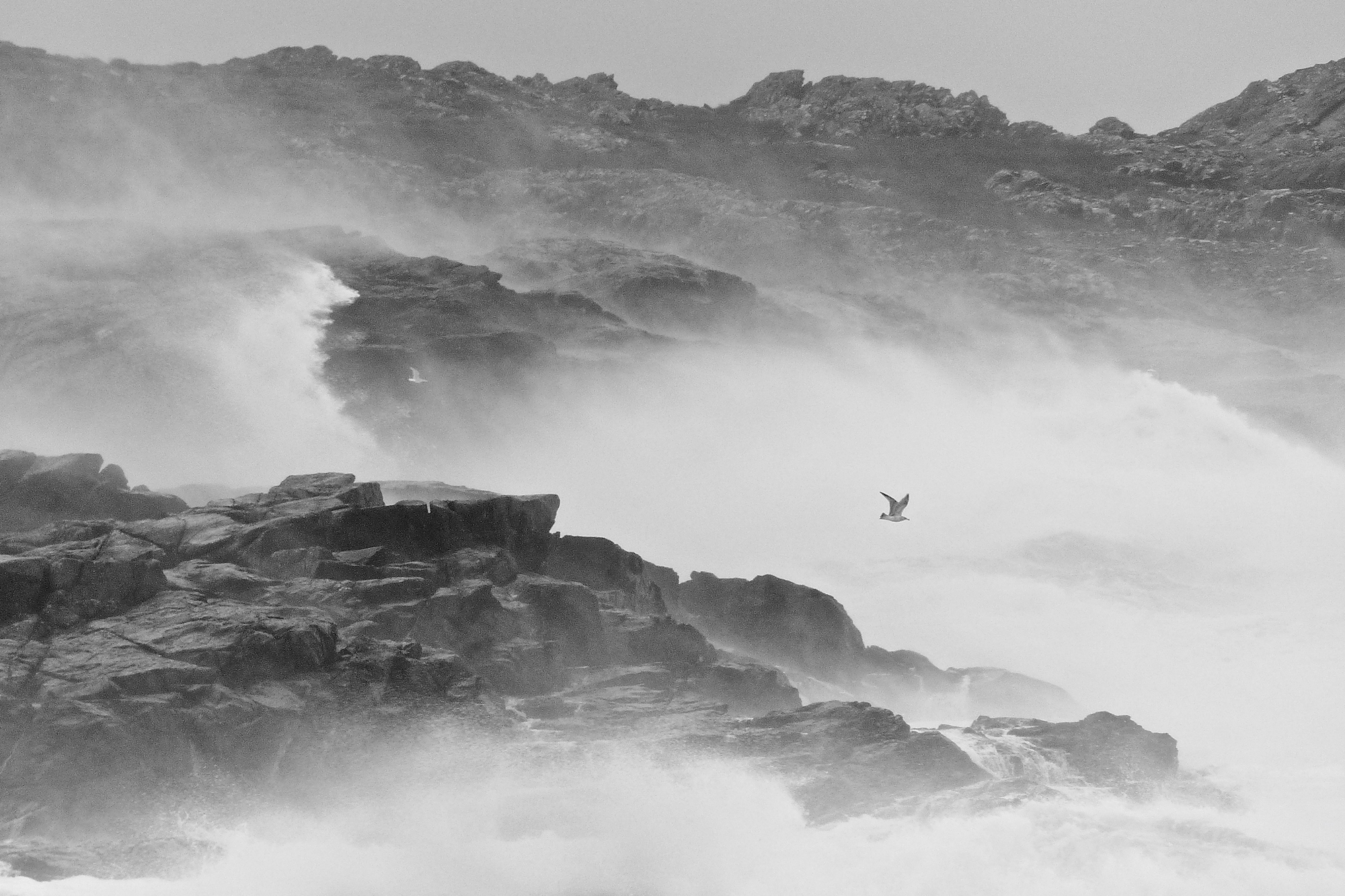 The name Ardnamurchan has been translated in various ways.  Angus Henderson in his ‘Ardnamurchan Place Names’ says that the derivation is entirely Gaelic, with the first two words easily translated into English: Aird is height or headland, and nam means of.  The remaining part, murchan, has been translated as mor chuan, great seas, muir chon meaning sea hounds or whales, muirchol meaning hazel sea, or murdhuchan meaning mermaids, sea sirens or sea-nymphs.

Looking at this superb photo, taken near the lighthouse by Ricky Clark, an employee of Ardnamurchan Estate, at the height of the severe storm of 10th December, there’s little doubt as to which is the most appropriate. 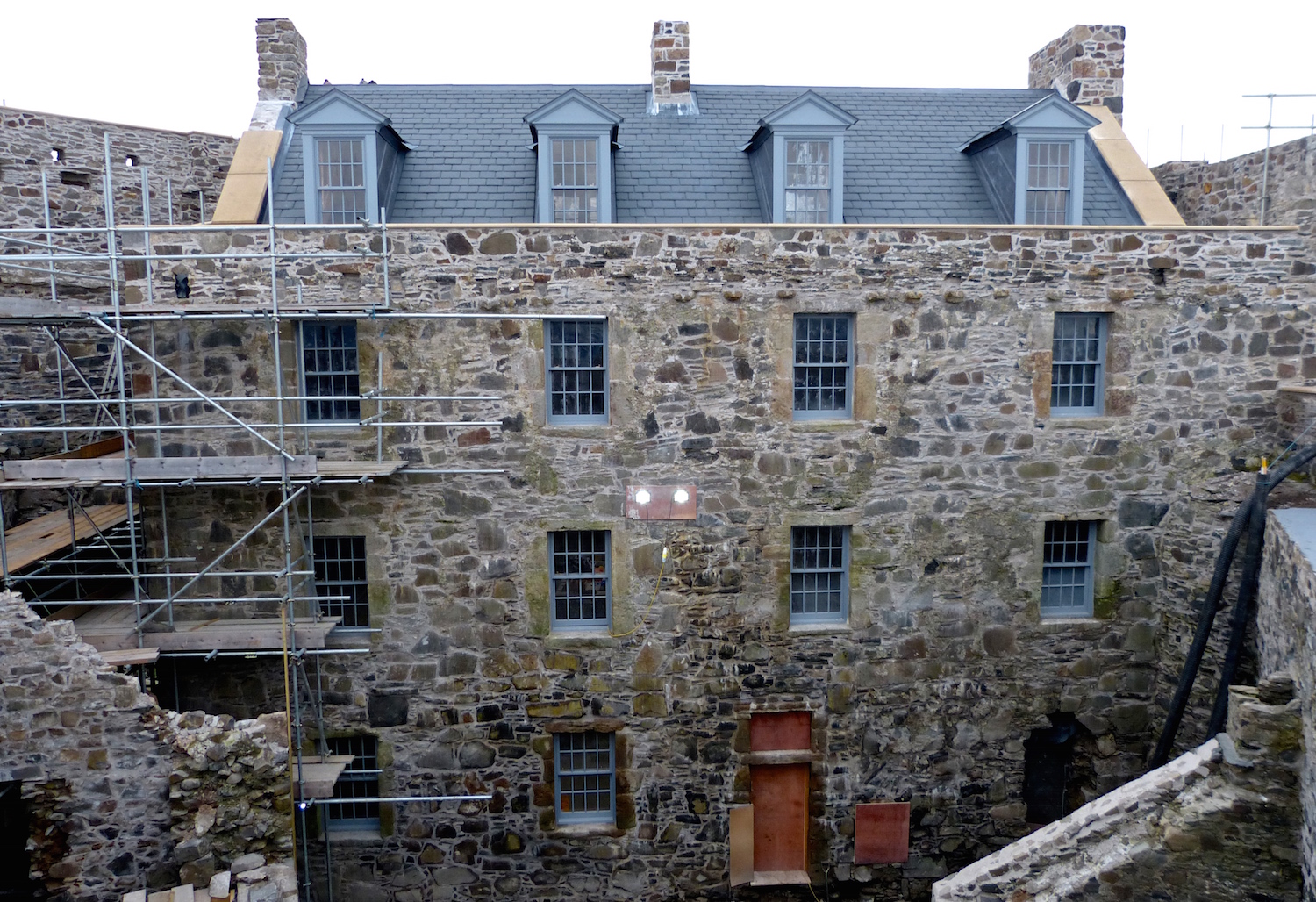 Scaffolding has obscured the front of the main residential building in the courtyard of Mingary Castle for the last year, so it was an exciting moment, a milestone in the refurbishment of this historic building, when the scaffolding came down last week, revealing a facade modelled on what the ‘north range’ would have looked like after its last major refurbishment, some time around 1720.

This is not as the MacIains would have remembered it.  At the height of their power on Ardnamurchan, this would have been a mediaeval hall with cellars beneath, feasting hall above, and an upper area for sleeping accommodation.  This hall isn’t lost – archaeologists have found that many of its walls still stand, incorporated into later building.

Completion of the refurbishment of the castle is due early next summer.  For more details of this historic project, go to the Mingary Castle blog- link here. 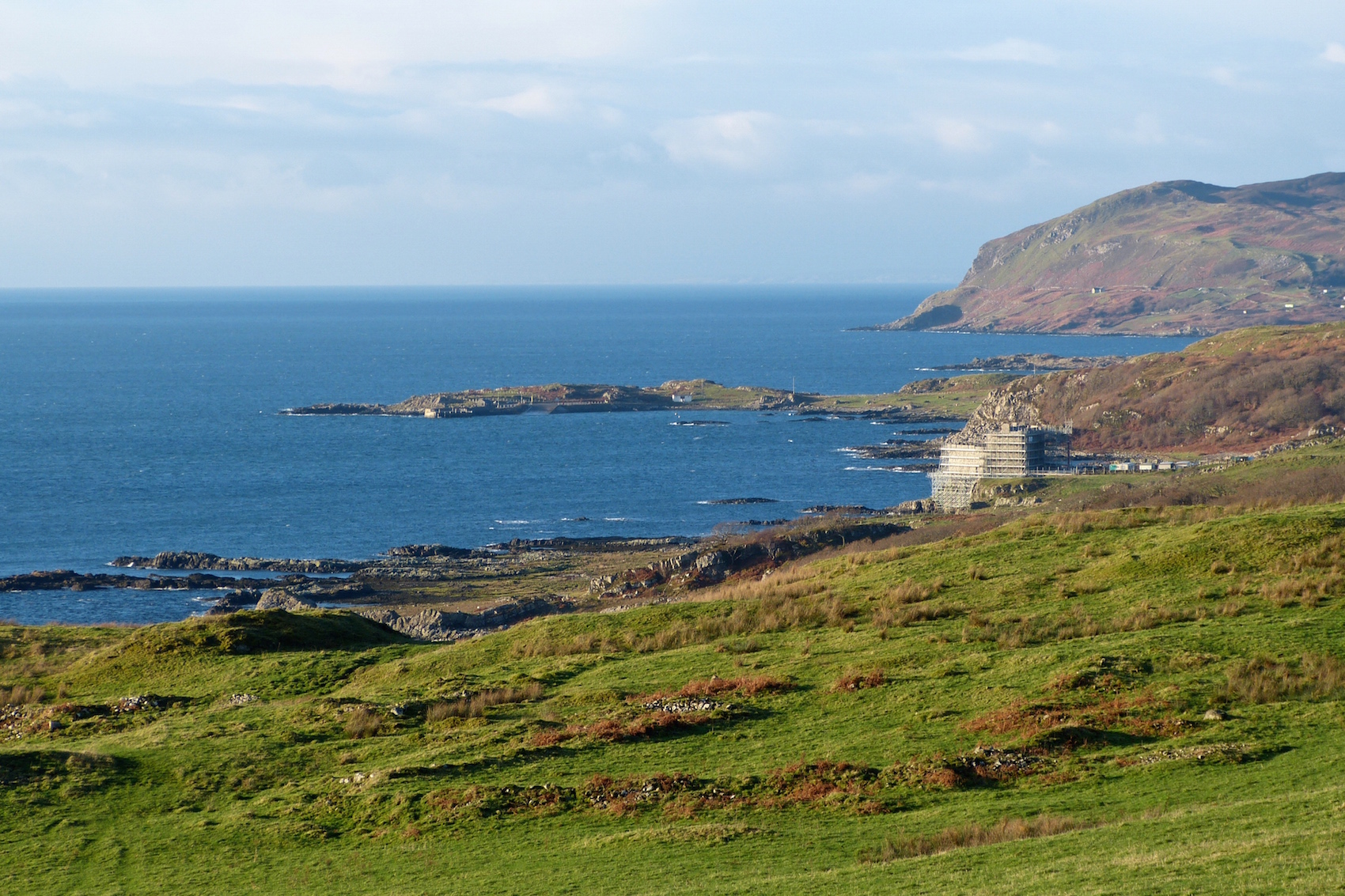 Mingary Castle with the remains of Choire Mhuilinn in the foreground

This picture looks westwards along the southern shore of Ardnamurchan towards Mingary Castle.  The castle is still sheathed in scaffolding as work continues on its restoration, but this entry is less about the castle than the odd piles of stone that can be seen in the foreground of the photograph.  They are the remains of a small settlement, hundreds of years old, which, along with about twenty-five others, was once settled by members of Clan MacIain.  The name of this particular clachan is Choire Mhuilinn, choire meaning corrie in the sense of a hollow or depression in the land, and mhuilinn meaning mill.  Choire Mhuilinn was cleared of its inhabitants in 1828 to make way for an extensive farm which would be based at Mingary.  Many of its people left the area, while the others were scattered between those townships which were not being cleared but reorganised into croft holdings.

This picture was taken the other day in clear November sunshine.  Walking amongst the stones was very moving, as they were the remains of people’s lives, their homes, their byres and field walls, their fields, their vegetable gardens and their children’s playgrounds.  And, standing beside the houses, one had to envy the view their owners had from their front doors. 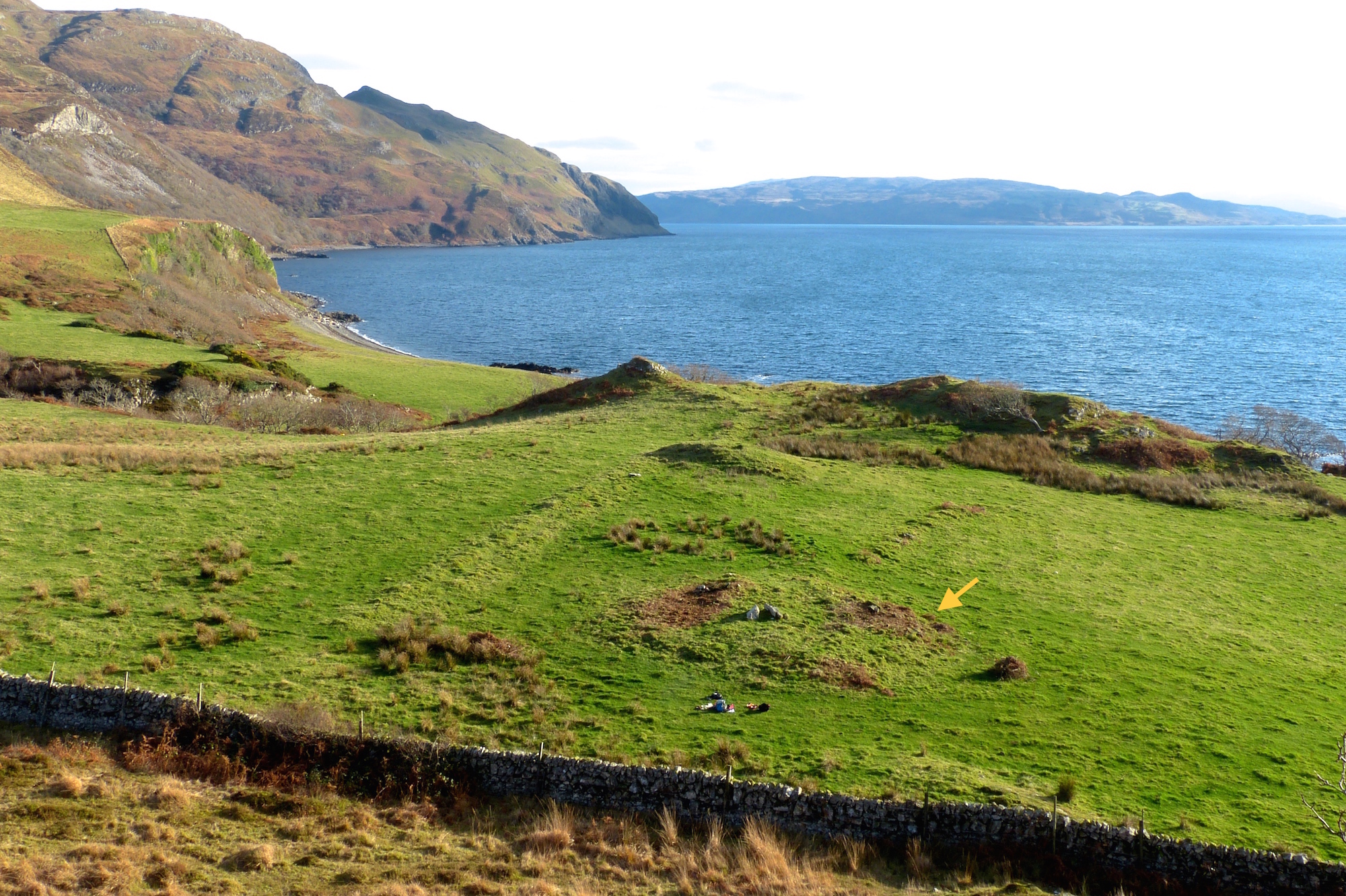 Neolithic Kerb Cairn to the east of Mingary Castle

This site is less than a mile to the east of Mingary Castle, just beyond the lime kiln used to produce the mortar used to build its great walls.  Found by Ricky Clark, a member of the Ardnamurchan Estate’s staff, only a week ago, its main feature – arrowed – is what is probably a Neolithic kerb cairn, a burial mound which, in its original form, consisted of a great mound of stones over a ‘cist’, a tomb constructed of slabs of local stone, of which two are still visible in the centre of the circular structure.  The site was cleared on Saturday by members of the Ardnamurchan Community Archaeology group who, to be honest, were amazed at what they had found as it’s not marked on any archaeological maps of the area.  Also visible are two ancient walls and another circular structure just beyond the cairn, picked out by tufts of marsh grass, leaving the archaeological group plenty more to work on in the future.  Now named Erickson’s Cairn, the site will be registered with Archaeology Scotland.  More details on the Kilchoan Diary – link here.