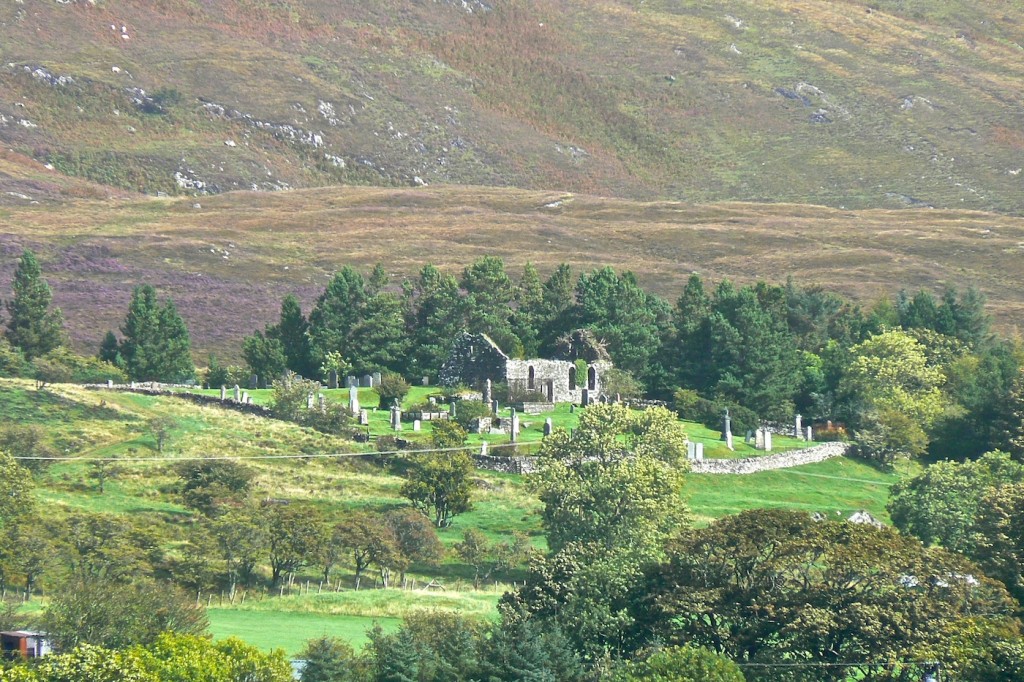 St Comghan’s church is the church in which the MacIains would have worshipped throughout the three hundred years during which Ardnamurchan was their homeland.  Today it is a ruin standing on a low hill overlooking the village of Kilchoan.

Saint Comghan was a Christian prince mentioned in Irish Mythologies who lived in the latter part of the 8th century. Expelled from Leinster, Ireland, by non-Christian neighbours because of his attempts to convert the local people, he fled to Iona with his mother Kentigerna and brother Fillan (Fillin), arriving immediately after the time of St Columba. From Iona, Comghan voyaged around the Highlands and Islands, preaching and establishing churches, fourteen in all, one of them at this site on the south side of Ardnamurchan. 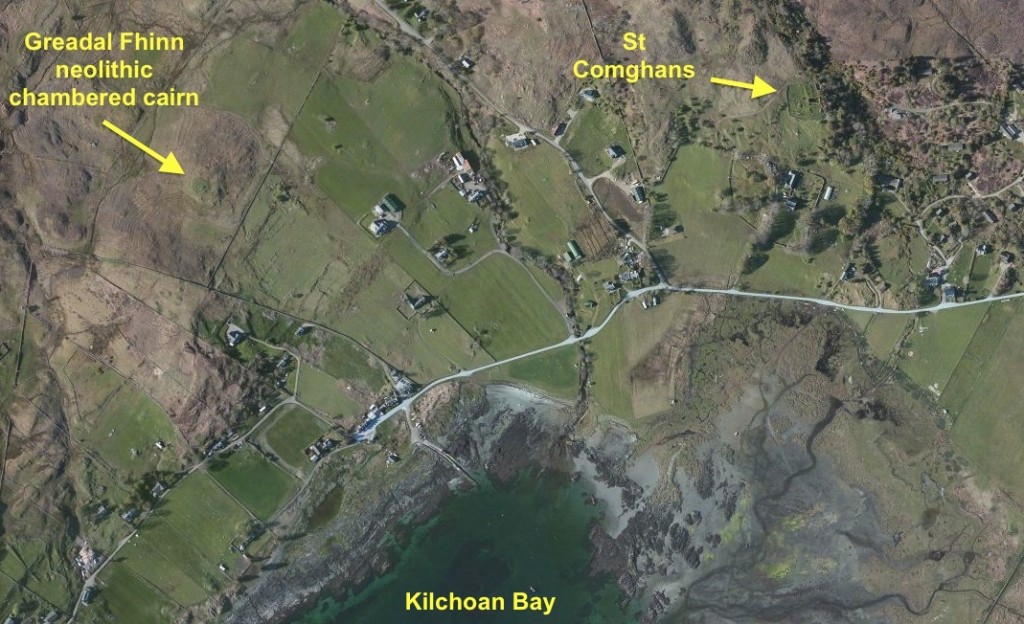 The settlement in which Comghan established his church stood at the northern end of a shallow, southwest-facing bay. The church was built on a low hill at the back of the village. While there are still good views from the church, the trees down the east side have restricted it in that direction. Having the church must have been important to the inhabitants, because their settlement became known for its church (cille) of Comghan (choan), or Kilchoan. While the settlements on either side, along with many of the coastal settlements of Ardnamurchan, were given later, Norse names, Kilchoan retained its Gaelic name.

Evidence for a earlier church on the site has been lost.  Construction dates for the existing ruin are said by the Royal Commission on the Ancient and Historical Monuments of Scotland (RCAHMS) to be 12th to 13th century. The church was rebuilt in the 18th century, possibly in the years 1762-63 – a stone dated 1763 is in the lintel of the most easterly of the three windows in the south wall. 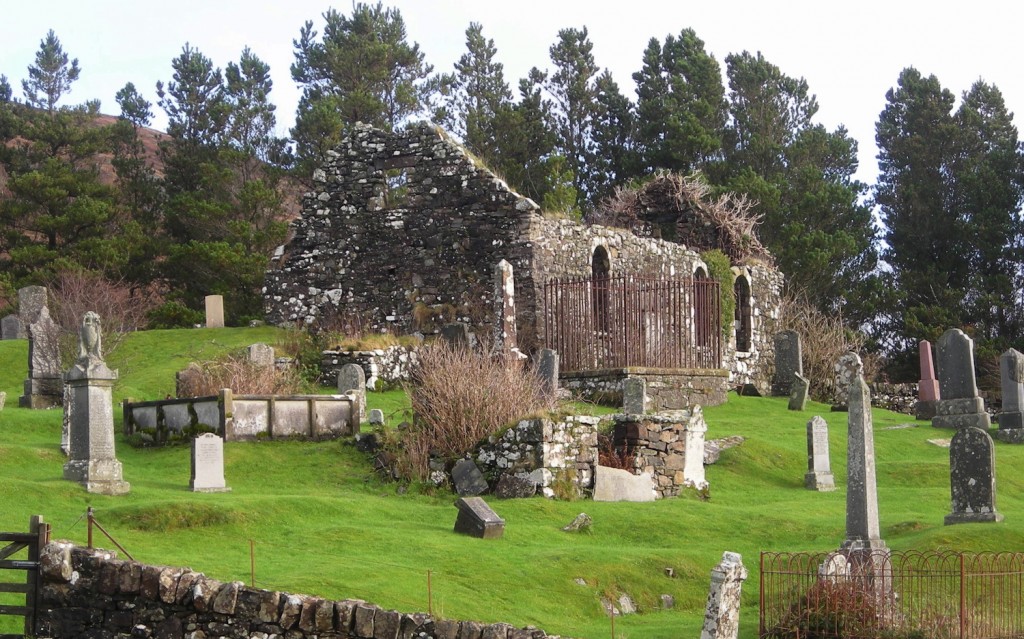 A drystone wall runs round the graveyard.

The church stands in a large burial ground which is surrounded by a drystone wall. The burial ground is entered by a small gate on the west side, seen on the left of this picture, with a much larger gate, which would have allowed access for a cart, on the north side. No local record exists of the burials in the churchyard, though some of them are numbered, but there must be hundreds. Some are marked with gravestones, from elaborate granite monuments to rough, unmarked pieces of slate, others have grave slabs, but many graves have lost their markers. The oldest are two grave slabs, believed to be from Iona and dated to the 14th or 15th centuries – further details here.

Only the walls of the church remain, the roof having collapsed and been removed. The structure is aligned east-west and measures 14.4m by 5.2m. Although the walls are said to be of differing dates, all are built of a masonry of random rubble with dressings of greenish-grey sandstone, possibly from Lochaline on Morvern. 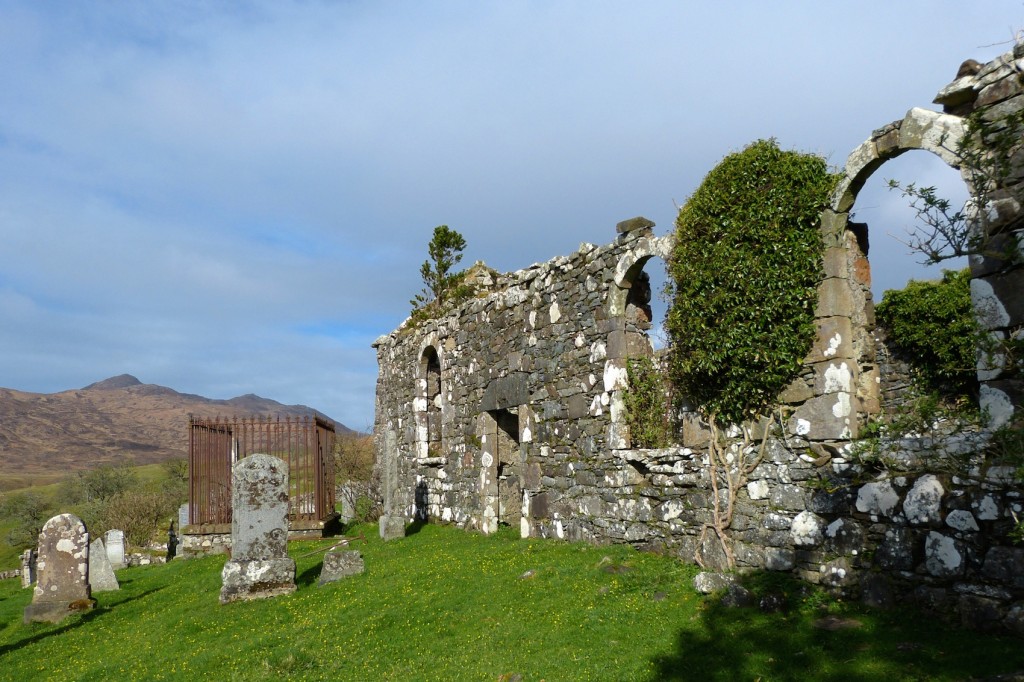 The south wall of St Comghan’s

The RCAHMS report states that the south wall is entirely 18th century. The entrance, which has a stone slab across the lintel, and the three semi-circular headed windows are all 18th century. The RCAHMS report suggest that the whole south wall was rebuilt at the same time.  The key stone at the top of the window at the right of the picture has 1763 carved into it, the presumed date that the reconstruction of the church was completed. 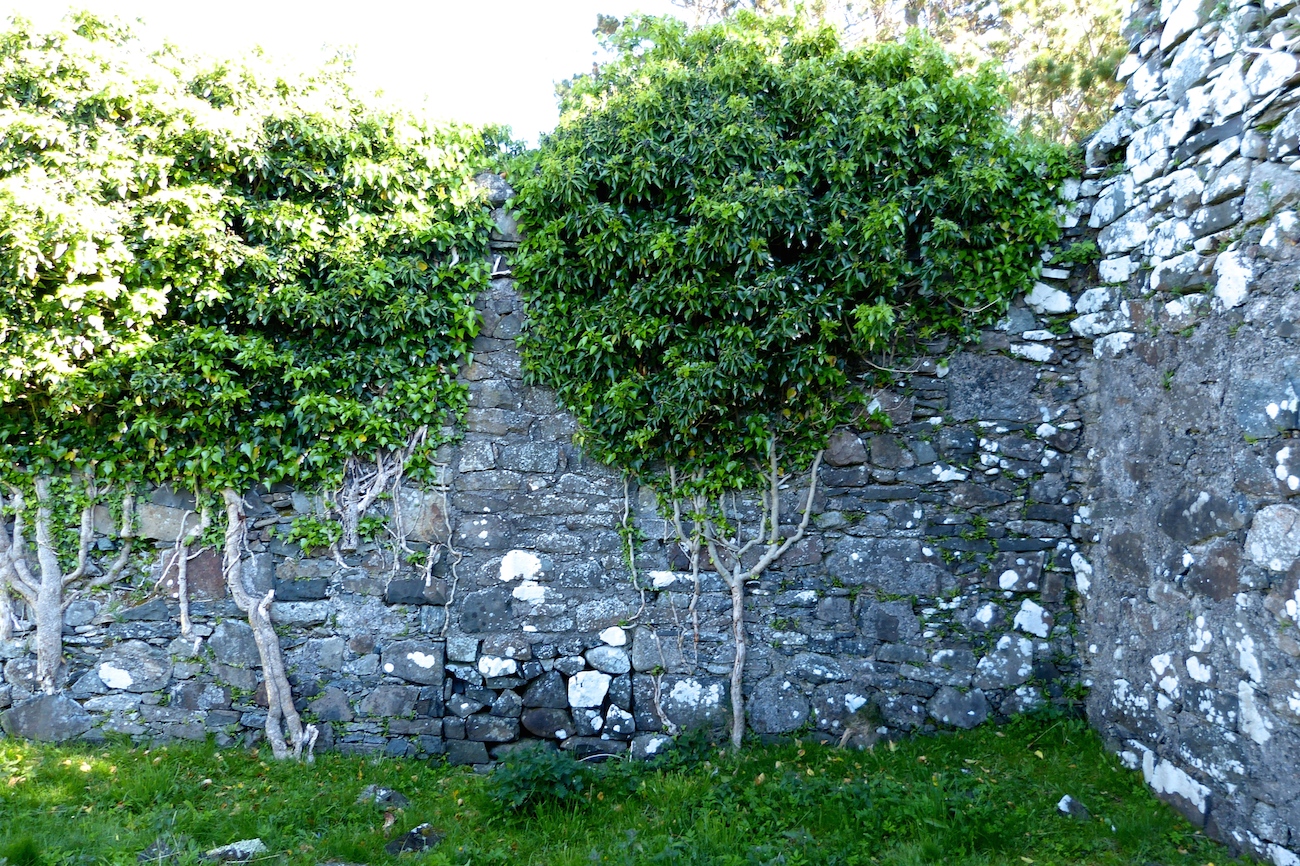 This picture shows the interior of the north wall.  It has no windows but once had an entrance near its east end – this can be clearly seen in this picture.  According to the RCAHMS, the insertion of a door was carried out in the 18th century restoration, and the blocking relatively recently.  There are a couple of points to note here.  Firstly, as can be seen, the lower part of the door was blocked in a different way from the upper.  Secondly, when one searches for the blocked door on the exterior of the building, it can’t be seen.  The reasons for these are a mystery. 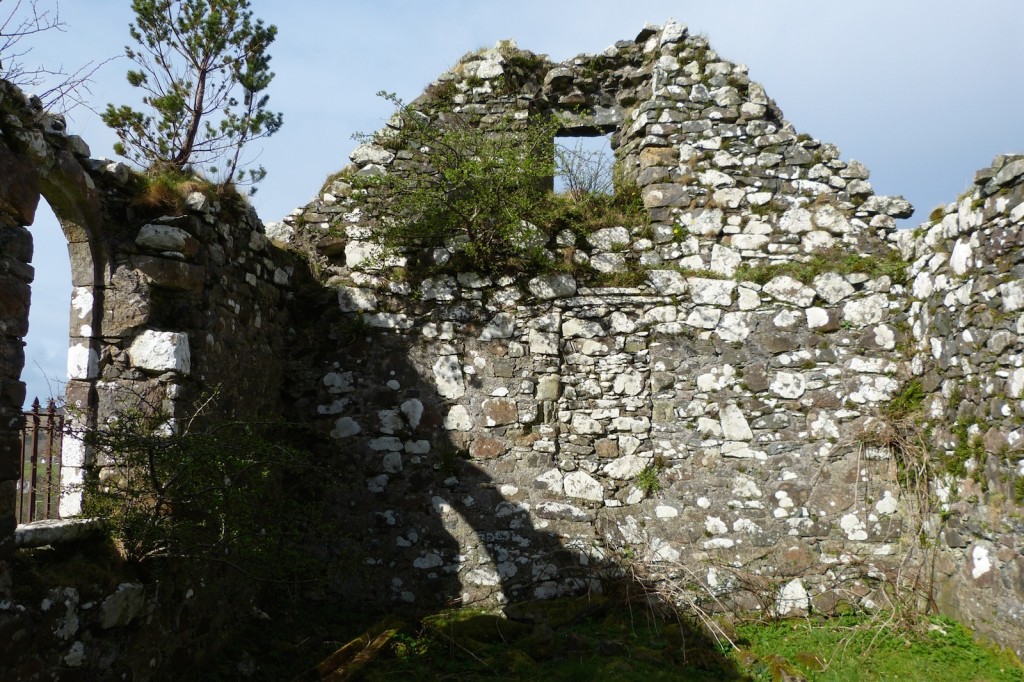 Interior of the west gable of St Comghan’s

The lower part of the west gable wall has, according to the RCAHMS, ‘a good deal of mediaeval masonry’. In it there is a lintelled window which is ‘deeply splayed’ – narrow on the exterior and wide on the interior. While this is blocked, it is suggested that this was not a mediaeval window but a later replacement of an original window.  As with the north wall door, the blocking was done some time after the 18th century.

The upper part of the west gable was reconstructed in the 18th century, and included a  stone-lintelled window. This lit a gallery at the west end of the church, probably accessed by stairs which ran along the north wall.  There is clear evidence for this: there are sockets in the north and south walls which held the main beam which supported the gallery.

The RCAHMS report states that the west gable is ‘surmounted by the stump of a plain, rectangular bell cot’, but this is difficult to see today. 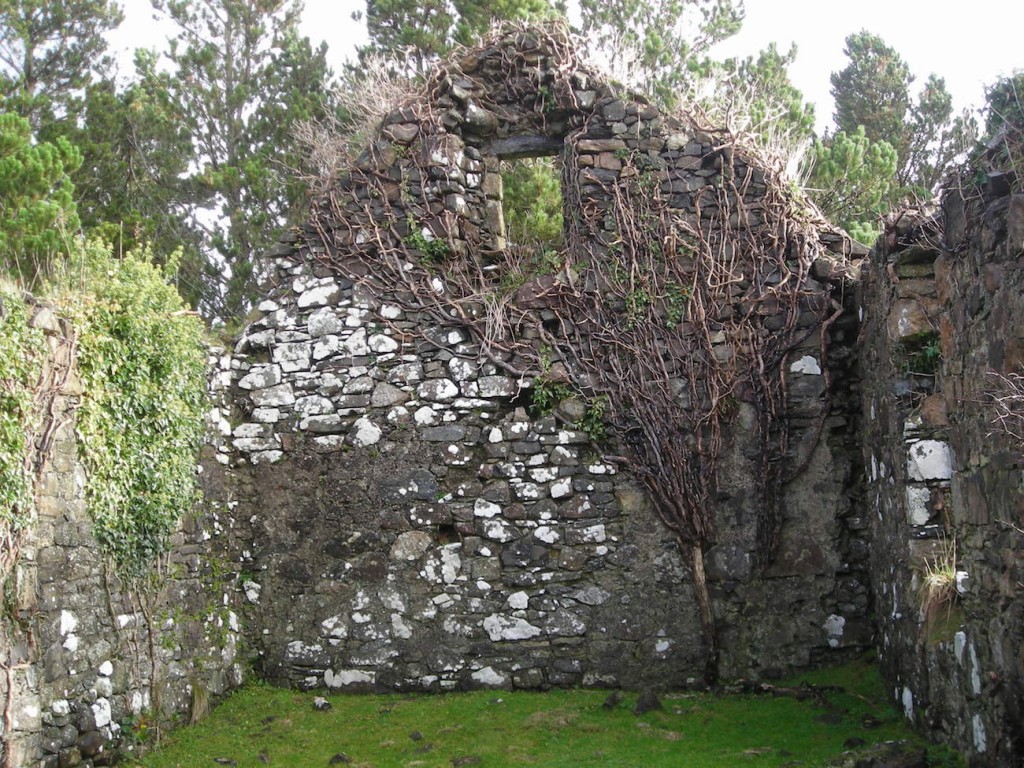 As with the west gable, the lower part of the east gable wall is mediaeval – it’s seen here from the interior. The centrally-placed window opening at ground floor level, now blocked, retains part of a rebated daylight opening of 12/13th century age, while the upper part of the gable is similar to west wall, having an 18th window opening.  As with the west gable, there was also a gallery at this end of the building, with its beam-sockets. 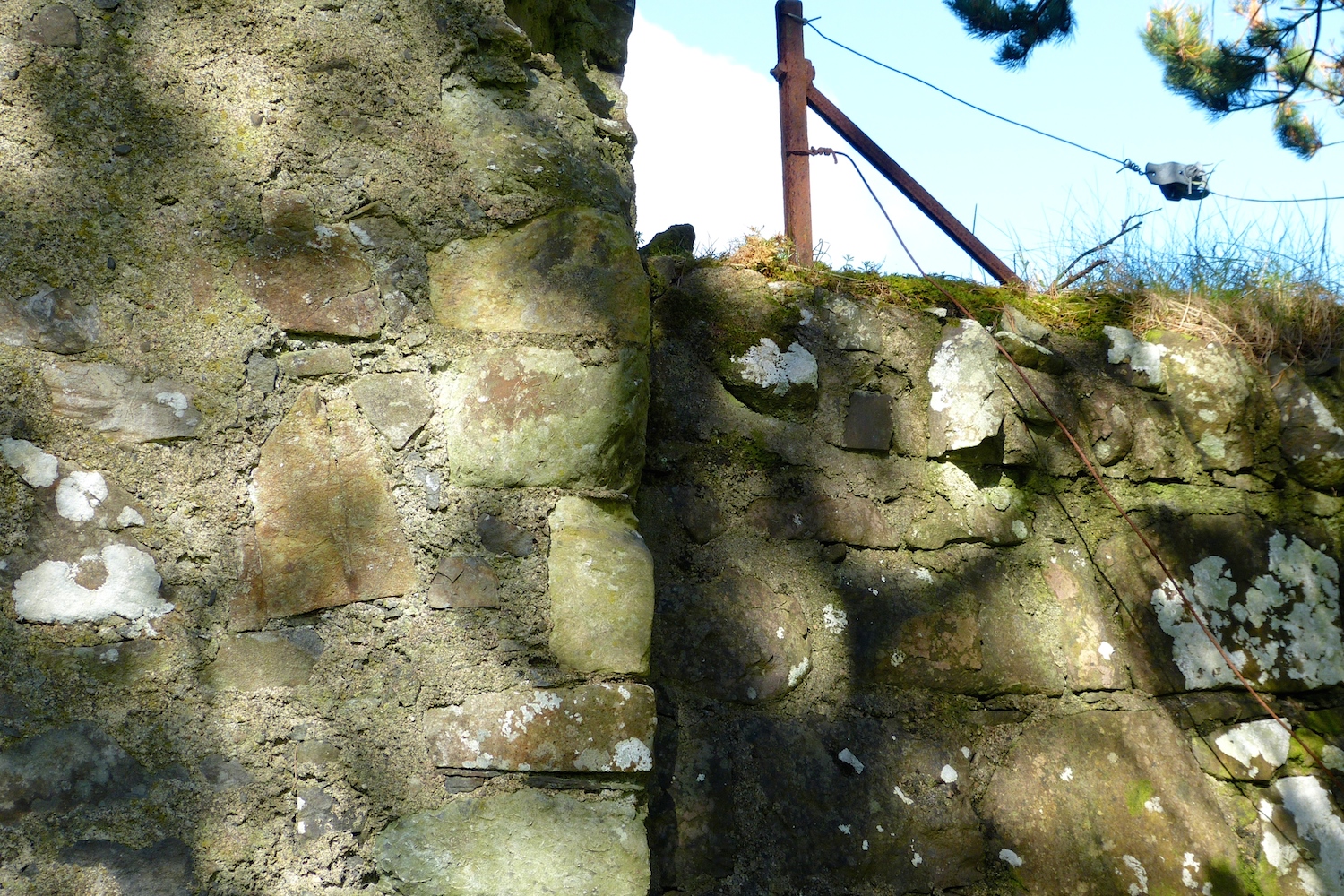 The exterior of the east gable is difficult to access through dense woodland, but it’s worth the effort as some of the features of the original mediaeval building are visible, including these freestone quoins which form the angle of the walls.  They are of a greenish sandstone which isn’t local. 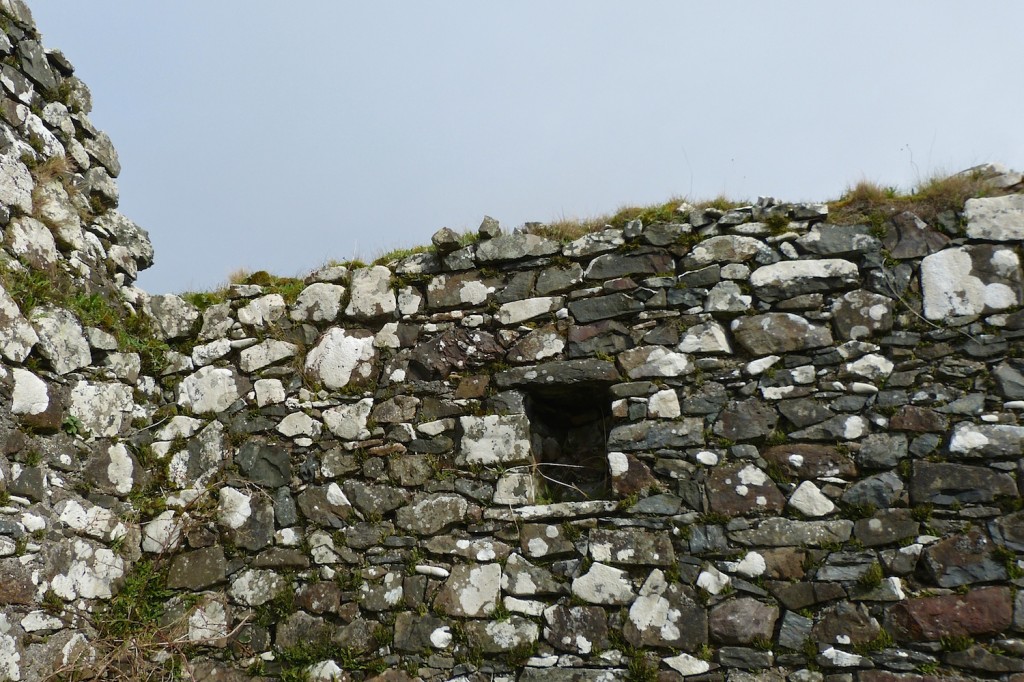 Beam socket in interior of the north wall

As already mentioned, the building, as reconstructed in the 18th century, had galleries at the east and west ends to increase its capacity.  The beam socket shown here is in the north wall, at its western end.  The galleries were reached by internal staircases in the northwest and northeast corners, with the pulpit placed between them against the north wall.  A similar arrangement exists in the parish church which replaced St Comghan’s and which is still in use today – one wonders whether this was done deliberately so the new church had some of the features of the old. The new church was opened in 1831, at which date St Comghan’s was reported to be ‘long in ruins’.

The RCAHMS entry for St Comghan’s can be found at this link.