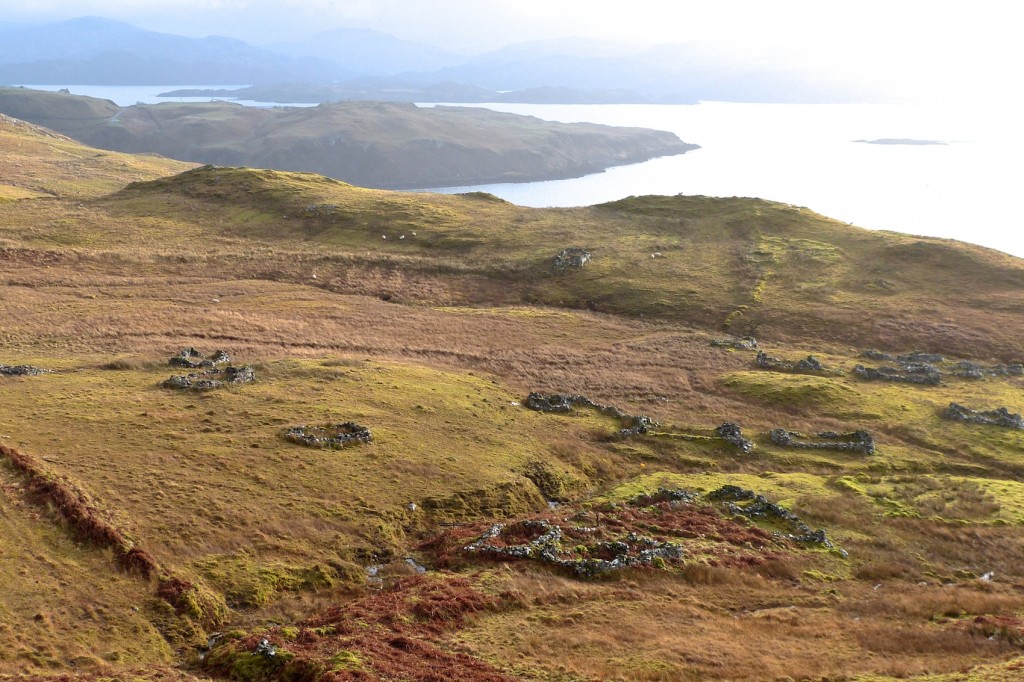 Bourblaige, a clachan cleared in 1828.

In the years of the clearances, when people were sometimes forcibly removed from the clachans in which their families had lived for generations, many left Ardnamurchan for other parts of Scotland and for places such as the US, Canada, Australia and New Zealand – picture shows the clachan of Bourblaige, which was cleared in 1828.

Those that stayed were reorganised by the Ardnamurchan Estate’s landlord and his factor into a new type of settlement called a crofting township.  These were established on land belonging to existing clachans, usually those occupying poorer land, or on underused land. A good example of an existing clachan which was reorganised while, at the same time, accepting immigrants from place like Bourblaige, was Ormsaigbeg, while Sanna and Portuairk are examples of a ‘new’ townships. Instead of land being held communally, crofting townships were divided into self-contained farms – the crofts – which the tenant rented directly from the landowner through his agent. 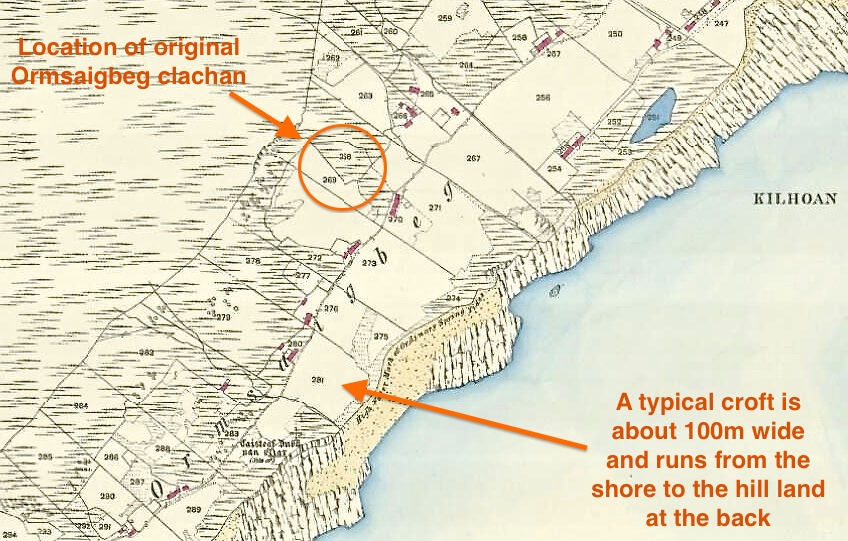 Part of the township of Ormsaigbeg

The shape of these townships varied. The original Ormsaigbeg clachan was completely destroyed in its reorganisation, the new crofts being spread out along the coast track – the map above is from the OS 25″ map of 1872 – while Achnaha retained its nucleated structure. Some clachans, even after they had accepted people cleared from other clachans, were later themselves cleared – this was the case with the three Swordle clachans which, after taking families from Bourblaige, was cleared and its people moved on to Kilmory and Sanna. 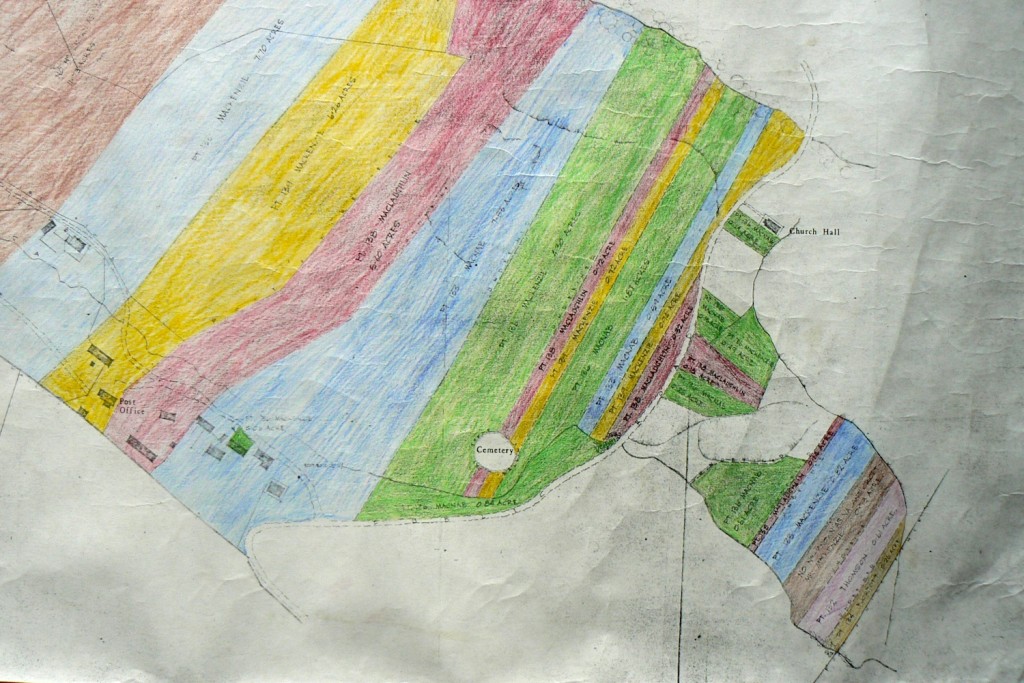 A croft map of Kilmory township

While the arrangement of crofts in Ormsaigbeg was fairly straightforward, land divisions in other crofting townships were complex. This map of Kilmory, courtesy of Mary Khan, shows the fragmentary arrangement of the croft holdings, probably designed to give everyone at least some of the best land which is to the right of the map. 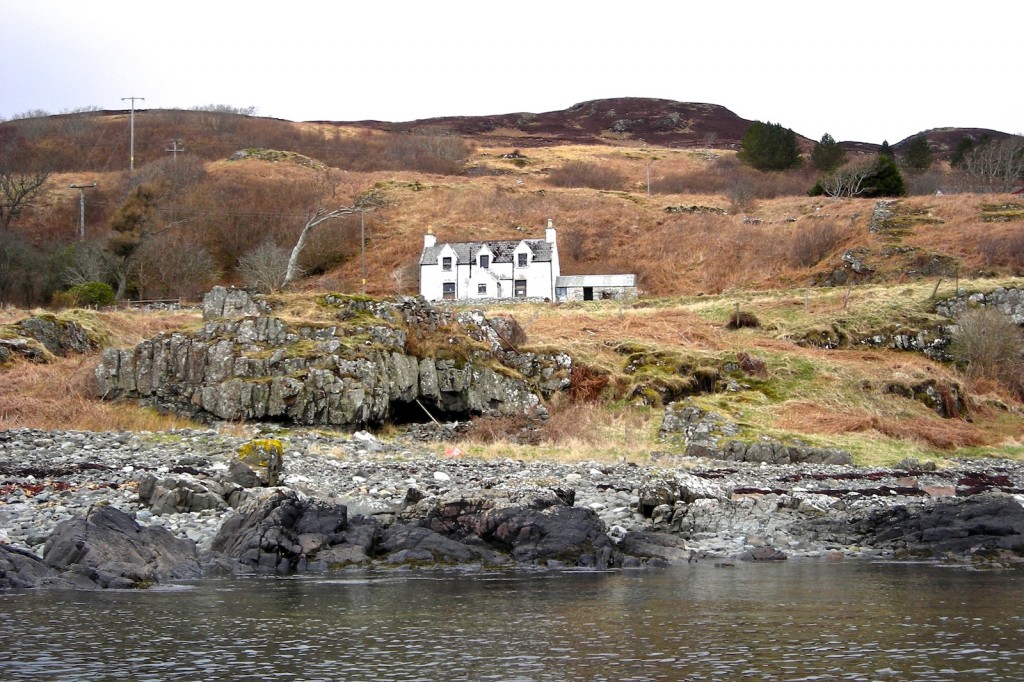 A deliberate feature of these crofts was that they were too small to support a family – this photograph of a croft in Ormsaigbeg shows all its land from the beach to the common grazings on the distant hill. Their small size obliged both adults and children on each croft to find a way of earning cash, either through working for the local estate, or by burning seaweed for potash (I am not aware that this industry existed on Ardnamurchan), or by working away – thus many men from Ardnamurchan went to sea in the merchant navy, and young women went into service in towns and cities. Some money could be earned from the croft itself, much as it had been in the clachans – for example, during some periods Highland-bred cattle earned good money, and were driven from remote areas to markets along drove roads. The largest market was at Falkirk. 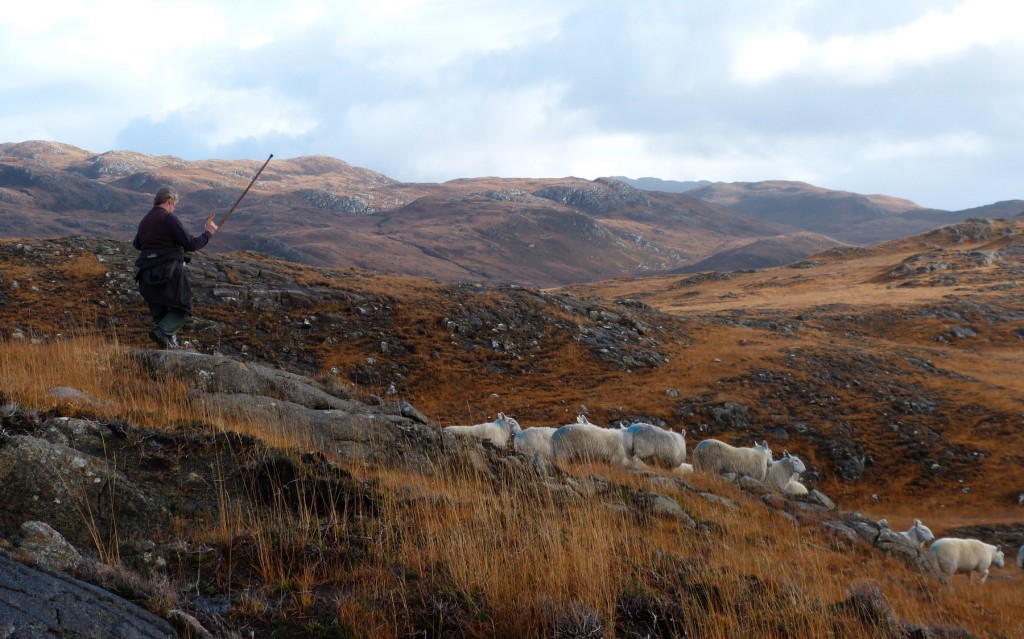 Gathering sheep on the crommon grazings

While each croft had its land, the crofter also had rights to graze an agreed number of animals – sheep and cattle – on the township’s common grazings. These grazing areas remained much the same as those held by the original clachan, and often included land where peat could be cut for fuel. The grazings are controlled by a township committee which is organised by an elected clerk.

Since 1886, a series of Acts have been passed through both the Westminster and, more recently, Scottish parliaments which have laid down specific crofting laws, which are now administered by the Crofters’ Commission. 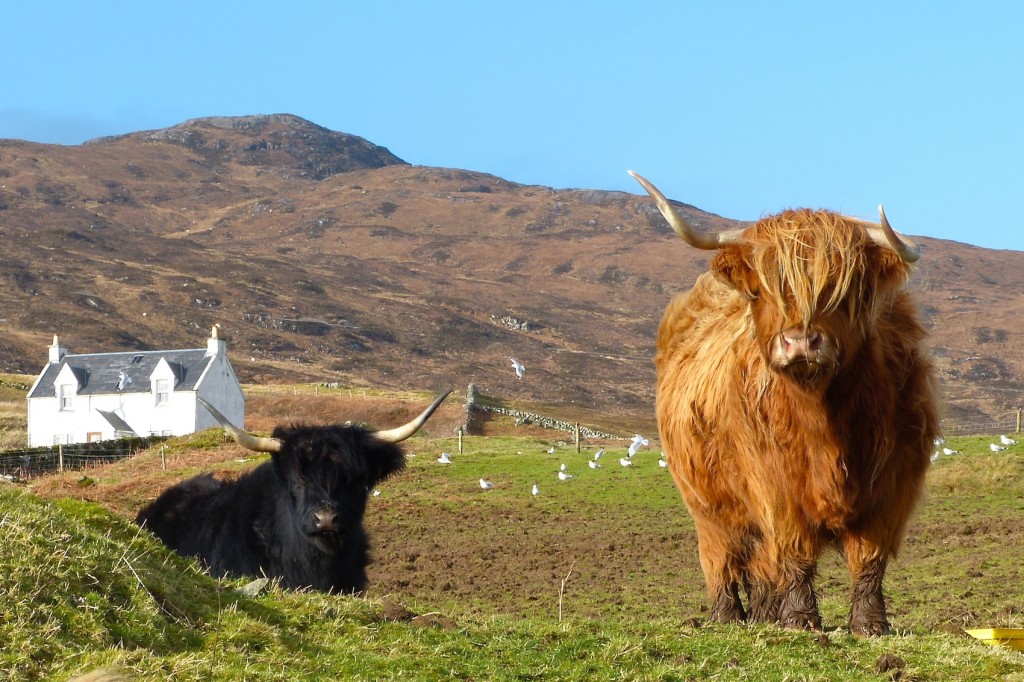 Highland cattle on a croft in Ormsaigmore

Most of the crofts on Ardnamurchan are actively worked.  While some crofters have exercised their right to buy, so they now own their croft, many crofts are still rented from landlords. The whole of Ardnamurchan was originally owned by Ardnamurchan Estate, but over the years the land on which there are crofts has been sold to other landlords, all of whom live away from Ardnamurchan. Since croft rents are strictly controlled by law, landlords’ income is low, which means that some have little interest in the running and improvement of the croft lands they own. As a result, while some crofts are beautifully kept, and illustrate the huge potential of this form of farming, others have been abandoned and are now overgrown and neglected.