Iain Sprangach MacDonald, founder of Clan MacIain, was descended on his father’s side from Gilbert (Gillebride or Gillebhride) Mac Gille Adomnan, known as ‘na h-Uamh’ from the fact that, during a time of depressed fortunes, he lived in a cave in Morvern. Gillebride is mentioned by the first Highland genealogist as ‘rig eilean Shidir’, that is, King of the Sudereys or Southern Isles, so he was a powerful man.

Stained glass window in the entrance hall of Armadale Castle. A portion of the window, which does not appear in this cropped image, reads “SOMERLED REX INSULARUM”. Source: Wikipedia

Somerled was born around 1113 in Morvern, Argyleshire, his name meaning ‘summer wanderer’, the son of Gillebride Mac Gille Adomnan and a Viking woman. During Somerled’s early youth his family was expelled from their home and took refuge in Ireland. Gillebride managed to persuade an Irish tribe, the Colla, to assist him in recovering his possessions. The attempt was a failure, and Gillebride died soon after.

According to legend, Somerled, like his father, lived for a while in the caves of Morvern, surviving off the land until, at the head of the men of Morvern, he defeated the Norwegians, leaving him master of Morvern, Lochaber and northern Argyle. Within a few years he had conquered all “the islands south of the point of Ardnamurchan, along with Kintyre”, and pronounced himself Thane or Regulus of Argyle. This happened at about the same time as King David I’s war with the Norwegians, which took place in 1135, so Somerled may have received these lands in a grant from the King.

Somerled’s newfound power attracted the attention of his neighbour, the Viking Olaf the Red, the Lord of the Isles, who ruled an area from Skye to Man. Instead of attacking Olaf, Somerled sought the hand of Olaf’s daughter, Ragnhild. They were married in c1140. Ragnald gave him three sons, Dugall, Ranald, and Angus, who joined his son by a previous marriage, Gillebride. Ranald was Somerled’s successor; Dugald founded the MacDougals of Lorn; and Angus, with his three sons, was killed in 1210.

In 1154, Olaf was murdered by his nephews who then took control of the northern half of the Kingdom of the Isles. Olaf’s son, Godfred Olafsson, returned from Norway and regained the entire Kingdom. But Godfred was a tyrant, and the Islemen revolted against him, appealing to Somerled for help. By 1156 they had defeated Godfrey, and Somerled finally became King of all the Isles.

King Malcolm IV of Scotland was concerned at Somerled’s growing power but, after a battle,  in 1157 the two Kings reached an understanding. This peace ended in 1163, when Somerled sailed up the Clyde with 164 galleys and 15,000 troops to Greenock, and marched on Renfrew. In the resulting battle Somerled and his son and heir, Gillebride, were killed.

Ranald (Raghnaill) succeeded Somerled, and married Fonia, daughter of the Earl of Moray. Ranald was defeated by his brother Angus in 1192. Nothing further is known of Angus, other than his later defeat and death, together with his sons (and the extinction of his line), at the hands of Ranald’s sons in 1210.

Little is known of Donald (Domhnall mac Raghnaill), Ranald’s son, except that Clan Donald traces its descent from him, and that his wife was a daughter of Walter, High Steward of Scotland.

Angus Mor (Aonghas Mor mac Domhnall) is sometimes considered ‘the first MacDonald’ because he was the first of the dynasty named for and created by his father. Islay was the centre of the lordship of both Angus and his father. According to a contemporary praise-poem, the realm Angus inherited from Donald included “every house from Mull to Kintyre”.

Angus was present at the Battle of Largs in 1263, which saw the effective end of Norse influence in Scottish affairs, but Angus, under some duress, fought for King Haakon of Norway against Alexander III, King of Scots. Following his defeat in the battle, Angus changed allegiance and was allowed to keep his lands – but he now held them under the overlordship of the King of Scots.

The year of Angus’ death isn’t certain but is supposed to be about 1294. He was buried at Columkill. 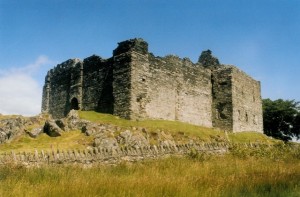 After Robert Bruce and his allies defeated the MacDougall Lord of Lorne at the Battle in the Pass of Brander near Lochawe in 1308, he then laid siege to Alasdair Og MacDonald in Castle Sween. Alasdair Og surrendered to King Robert, and was imprisoned in Dundonald Castle, Ayrshire, where he died in 1308.

Alasdair’s younger brother, Angus (Aonghas) Og, after supporting the English until 1301, changed sides to the Bruce, for example assisting him in his flight through Argyll in 1306, when he sheltered the Bruce in his stronghold of Dunaverty Castle at the southern end of Kintyre. For greater security Angus then had the Bruce transported to Rathlin Island. Angus also assisted in the Bruce’s 1307 attack upon Carrick.

As his power became established, and following Alasdair’s death, in 1309 King Robert granted Angus large fiefdoms, including Islay and the rest of his elder brother, Alasdair’s holdings, and much of the lands of the MacDougalls, including Ardnamurchan and Sunart. It is interesting that, when the district of Lorn was erected into a sheriffdom by King John Baliol in 1292 and given to the MacDougalls, it included “the lands of Ardenmuirich”, the first reference to Ardnamurchan in any public record.

Angus fought, with a contingent of Isles warriors, in support of the Bruce at the Battle of Bannockburn, 1314. In recognition, King Robert proclaimed that Clan Donald would always occupy the honoured position on the right wing of the Scottish army. As territorial rewards, the king bestowed upon Angus the lordship of Lochaber, which had belonged to the Comyns, with the lands of Duror and Glencoe, and the islands of Mull, Jura, Coll and Tiree, which had been part of the lands of the MacDougalls of Lorne.

Angus Og bestowed Ardnamurchan and Sunart, together consisting of 87,753 Scotch acres, on his brother Iain (Eoin) Sprangach, the founder of Clan MacIain.

Angus Og died in 1330 at Finlaggan Castle on Islay and was buried on Iona.