The Battle of Creag an Airgid 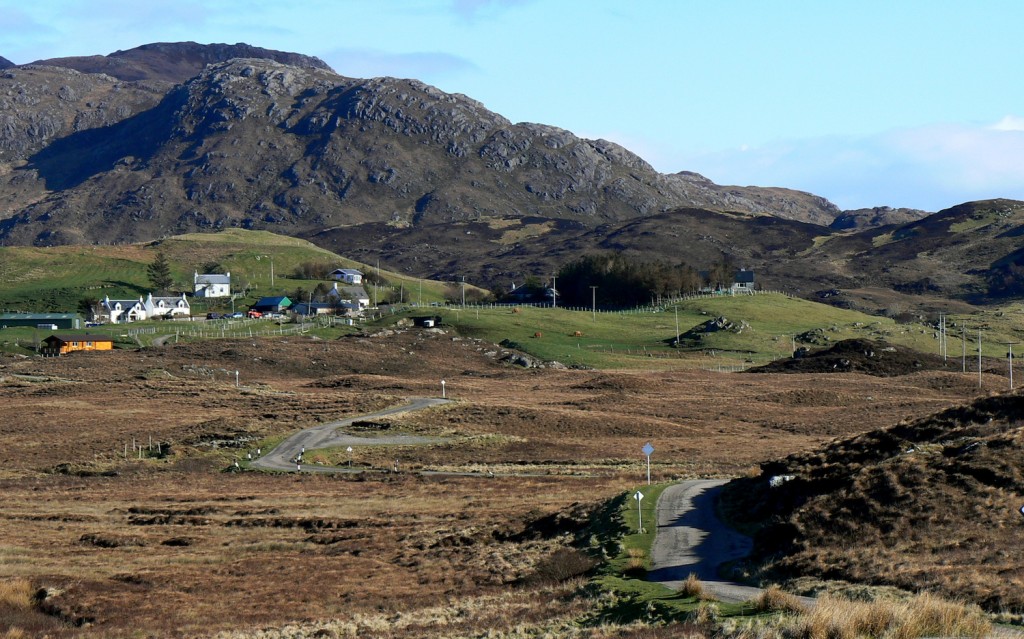 Creag an Airgid seen from the northwest, with the township of Achnaha in the foreground.

The hill called Creag an Airgid, Silver Hill, on the road between Kilchoan and Sanna, was the site of a battle in 1518 which saw the beginning of the end of the power that the MacIains had wielded for some two hundred years. In the day’s fighting they lost their chief, Iain MacIain, and two of his three sons, their deaths opening the way for the Campbells’ steady takeover of the MacIains’ Ardnamurchan homelands.

To understand the disaster that befell the MacIains, we have to go back almost a century, to the time when the MacDonald Lords of the Isles had reached their greatest power and independence. This followed the MacDonalds’ defeat of a royal army at Inverlochy in 1431. However, the discovery, in 1493, of their treachery in supporting the English king, Edward IV, led to their estates being forfeit to James IV of Scotland. In the inter-clan feuding that followed the fall of the Lordship of the Isles, the MacIains made the fateful decision actively to support the Scottish king.

In 1494 Iain MacIain showed his loyalty by apprehending Sir John of Islay and his son at Finlaggan and handing them over to the king. In 1497, Sir Alexander MacDonald of Lochalsh took up arms against the king and invaded Ross-shire, where he was defeated at the battle of Drumchatt. MacIain caught him as he retreated, and killed Sir Alexander. The death of Sir Alexander, and the trial and execution of Sir John and his son, provoked an angry response from other MacDonalds and their supporters: the Chiefs of Clanranald and Keppoch, Maclean of Duart and Cameron of Locheil were all bound by the Crown in the sum of £500 each as surety for the safety of MacIain and his people ‘from molestation or injury‘.

By the beginning of the 16th century the MacIain was the most powerful chief in Clan Donald. He had the support of a strong king. He was Chief of the Isles, and was secure in the lands he held in Ardnamurchan, Sunart and the Isles. 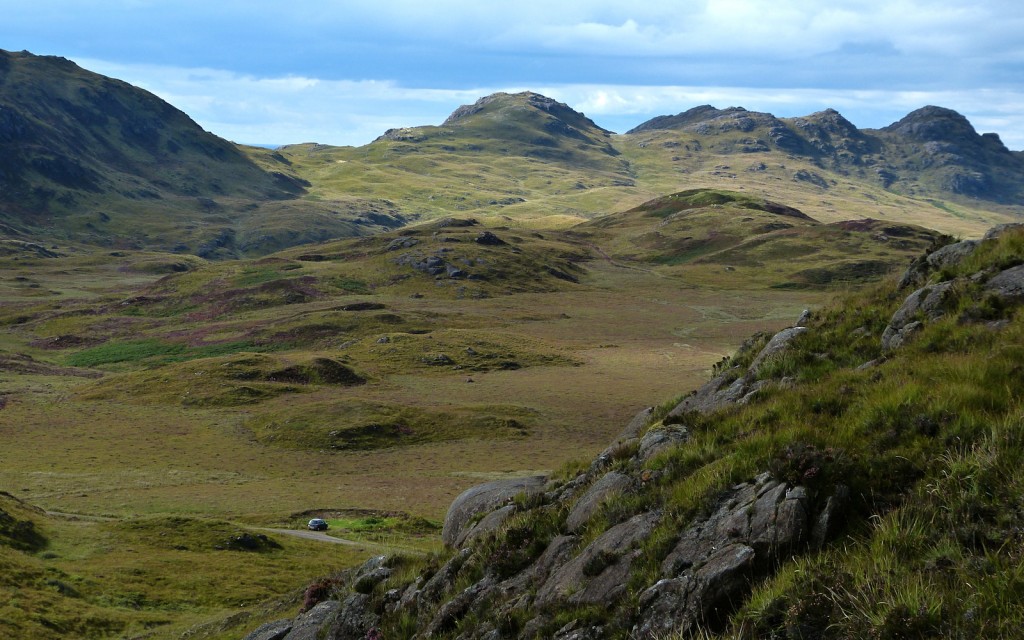 The battlefield, seen from the slopes of Creag an Airgid

In 1503, Donald Dubh MacDonald of Lochalsh made another attempt to restore the Lordship. Whilst Maclean of Duart and other powerful chiefs of Clan Donald supported the attempt, Iain MacIain remained committed to the Crown, and rendered significant service in the suppression of the revolt. His reward, in 1505, ‘for the good, faithful and willing service done by dear John Makkane of Ardnamurchan’ was to be confirmed in the lands in Ardnamurchan and Sunart, with the castles of Mingary and Dunnyveg, and the bailiary of Islay. The alienation of the MacIains from the rest of Clan Donald was now complete.

But the death of kings can change everything. On the 9th September 1513, King James IV died at the Battle of Flodden, his army destroyed by the English, and much of the ‘flower of Scottish nobility’ went with him. The MacIains rallied to the support of the monarchy by joining forces with the Campbell Earl of Argyll on his return from Flodden.

The state of Scotland in the wake of Flodden seemed to Alexander of Isla and Sir Donald of Lochalsh, both with vengeance to seek, an opportunity for another attempt to restore of the Lordship of the Isles. With the support of the MacLeods of Lewis and Raasay, they invaded Ardnamurchan, seized Mingary Castle, and ‘ravaged the peninsula with fire and sword’. The invasion was eventually repelled and the MacIains restored to Mingary.

In 1518, however, whilst Scotland continued to wrestle with the consequences of Flodden, there was a further incursion by the MacDonalds of Lochalsh and Islay, assisted by the MacLeods of Lewis and Raasay. This time, however, the invaders got their revenge. At Creag an Airgid, two miles out of Kilchoan on the Sanna road, Iain MacIain and his two older sons, John Sunoirtich and Angus, along with many of their men, were killed.

Creag an Airgid was a turning point for the MacIains. Ian’s only remaining son, Alexander, was a child at the time of the death of his father and brothers. The changing centre of power on the west coast was reflected in the Crown’s decision to give the wardship to the little boy’s mother’s father, the Earl of Argyll.

While we presume that the battlefield was the area of flat land to the immediate northwest of the hill, no contemporary written record of events exists.  What little we know comes down through oral accounts which were written down in the 20th century. 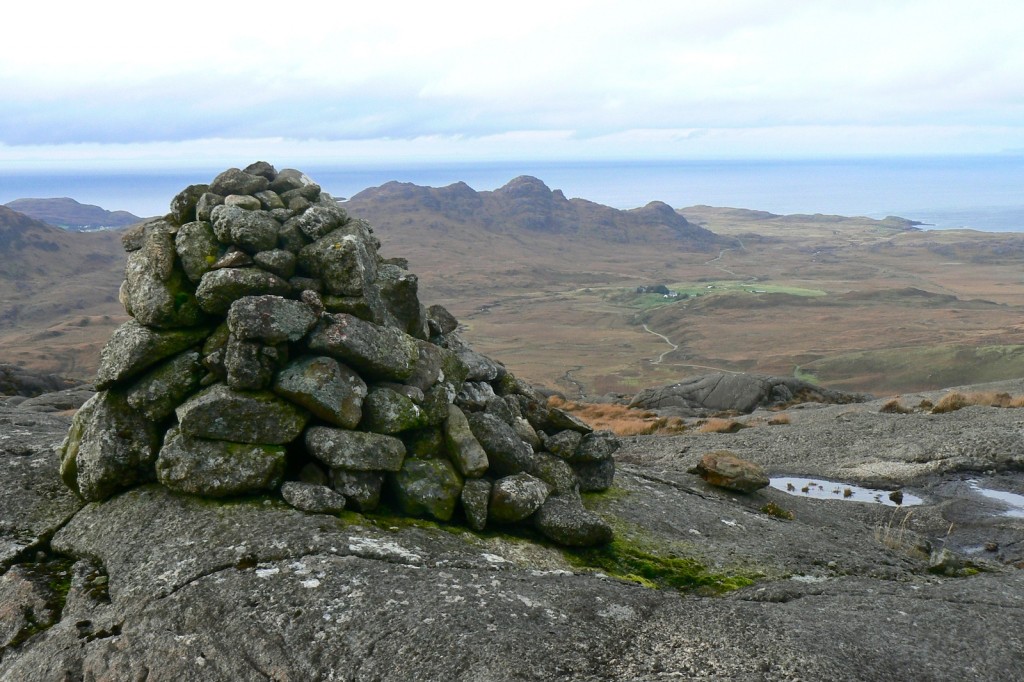 One of several cairns on and around the hill.

Angus Henderson, in his ‘Ardnamurchan Place Names’, 1915, wrote ‘The MacIains were defeated with great slaughter, the chief and his two sons…. being among the slain. The spots where tradition says these three were buried can yet be identified on a knoll close under the south-west side of Creag an Airgid and near the old march* between the farms of Kilchoan and Glendrian. The followers who fell are buried a little more to the south, at a place which can also be pointed out.’  [*A ‘march’, as used here, is a border area]

Though unable to find them, the author MEM Donaldson (1930) stated that the cairns lay somewhere in a hollow between two lines of hills on the right hand side of the road, travelling from Kilchoan, beyond the second bridge before Craig an Airgid is reached.

The contradictions between the two accounts – Henderson states they are on a knoll, Donaldson in a hollow – do not help the search for the cairns.  A number of cairns can be found in the area, but none fit the above descriptions.