Mingary Castle seen at sunset, with Mull in the distance. Picture: Ricky Clark.

An Outline History of the MacIains of Ardnamurchan

1158 Somerled completes his defeat of the Norse King of the Isles, Godred Olafsson, and takes his kingdom.

1314 Following his support of Robert the Bruce both before and at the battle of Bannockburn, Angus Mor’s son Angus Og receives extensive lands in the Isles and West Coast from the Bruce, much of it taken from the MacDougals.

Angus Og charters Ardnamurchan to his brother, Iain Sprangach ‘the Bold’, even though Iain had supported the English king, Edward II. Iain is the founder of the Ardnamurchan Clan MacIain.

1330/40 Iain Sprangach dies, date uncertain, and is succeeded by his son Angus, who rises in power under the Scottish King David II, receiving in 1341 a charter from King David II which nominally awarded him land on Islay, Kintyre, Gigha, Jura, Colonsay, Morvern and Mull.

1341, or soon after, Angus is succeeded by his son, Alexander.

1411 Alexander, along with some 900 other MacDonald clansmen, is killed at the battle of Harlow, and is succeeded by his son, Iain.

1427 In an attempt to assert his authority, James I of Scotland imprisons Iain along with Alexander MacDonald, Lord of the Isles.

1431 Released, the MacDonald chiefs defeat James I at Inverlochy, near Fort William.

1462 Iain, along with others of the Lords of the Isles, travels to London to sign the Treat of Westminster-Artornish with Edward IV of England, which pitted them against the Scottish king.

1467 By this date Iain has died, and has been succeeded by his son, Alexander. He is recorded as being a member of the Council of the Isles, an indication of his power.

1475 The Scottish king commissions Colin Campbell, 1st Earl of Argyll, to ‘invade the Isles lands with fire and sword’. Soon after, John of Islay, the MacDonald Lord of the Isles, submits to the crown and forfeits some of his lands.

1482 Angus Og MacDonald rebels against his father, John of Islay. They meet at sea in the battle of Bloody Bay, off Mull. The conflict starts the terminal decline of the Lordship.

1492 Alexander MacIain has been succeeded by his nephew, Iain, possibly his illegitimate son.

1493 Iain and the other chiefs of the Isles submit to James IV at Oban. The MacIains support for the king results in increased landholdings, in Jura, Islay and Kintyre, but this alienates the MacDonalds of Dunnyveg.

1494 Following a MacDonald rebellion against the king, MacIain attacks Finalaggan Castle and seizes both MacDonald of Dunnyveg and his son, who are taken to Edinburgh, tried, and hanged.

1497-99 Alexander MacDonald of Lochalsh rebels and attempts to restore the Lordship of the Isles, but is killed by MacIain. The MacIains’ power is now at its height, with land granted to him on Sunart, Jura and Islay.

1504-06 Donald Dubh MacDonald rises against the king, and attempt to regain the Lordship of the Isles. MacIain supports the crown in the suppression of the revolt, and is rewarded with land.

1515 In the chaos after James IV dies at the battle of Flodden (1513), the MacDonalds of Dunnyveg and Lochalsh, supported by the MacLeods of Lewis and Raasay, invade Ardnamurchan, seize Mingary Castle, and ‘ravaged the peninsula with fire and sword’. The invaders are finally repelled and MacIain restored. 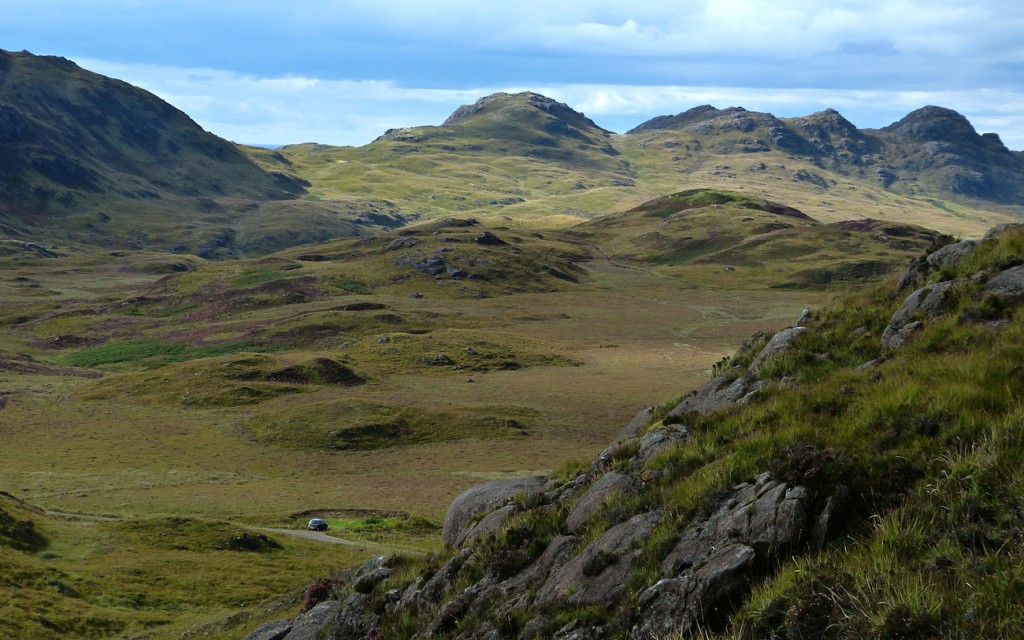 View of the battlefield from the summit of Creag an Airgid

1518 The invaders return, and Iain MacIain and his two sons are killed at the battle of Creag an Airgid, on the road between Kilchoan and Sanna.

1540 The remaining MacIain sibling, Alexander’s sister, Mariota, signs a conveyance of her interests to the king, but effectively the lands are in the hands of the Campbell Earl of Argyll. This was formalised in 1550.

The heir to Alexander’s chiefdom is seen as his cousin, Alexander MacIain. He joins the Clanranalds in an attack on Clan Fraser, and becomes involved in a further attempt to re-establish the Lordship of the Isles. His lands are reduced to a few tenancies.

1570 Alexander dies, and is succeeded by his son, Iain. He became involved in bloody feuding between the MacDonalds of Dunnyveg, the Macleans of Duart and the Clanranalds.

1588 The Florida, a ship of the Spanish armada, is persuaded by Maclean to join in pillaging Clanranald lands and beseiging Mingary castle, an attack which is repulsed.

1592 Iain dies, and his son Iain Og becomes chief at a time when James VI is reasserting crown control on the west. Failing to find dues owed the crown, MacIain is outlawed but later pardoned.

1596 Following a dispute over land, Iain is killed by his uncle, Donald MacIain, who becomes chief. Dissenting MacIains join with the Camerons of Locheil to defeat and kill Donald and his supporting Macleans. Iain Og’s brother, Alexander, becomes chief.

1602 The Earl of Argyll enforces the deed of conveyance signed by Mariota in 1540, and MacIain is forced to rent his lands from the Earl.

1608 Alexander fails to heed a Crown summons, and dies soon after. His son Alexander, is a minor, so his uncle, Donald, becomes his ‘tutor’.

1611 A record in the Register of the privy Council indicates that the MacIains are still in possession of Ardnamurchan.

1612 The Earl of Argyll commissions Donald Campbell of Barbreck-Lochow to take possession of Mingary Castle, and to control the rents in Ardnamurchan. In the face of Donald Campbell’s cruelty, the MacIains rebel.

The MacIains join Sir James MacDonald of Dunnyveg and other MacDonalds in rebellion, hoping to restore the power of the Isles. The rebellion rapidly collapsed, and Donald Campbell sets about punishing the rebels.

1618 Alexander MacIain joins the Clanranald MacDonalds in an attack on Donald Campbell in Mingary Castle, putting the garrison to flight, but Campbell is later reinstated, and the MacIains are at his mercy.

1619 A group of MacIains resist Campbell and are pronounced rebels and outlaws.

1621 Donald Campbell successfully complains to the Privy Council that Alexander MacIain is stirring up trouble and threatening to regain his possessions ‘either by law or by force’.

1622/24 Alexander is in open rebellion against Campbell and attacks Mingary Castle. Driven from their homes, the remaining MacIains turn to piracy. Despite a warrant being issued ‘for the pursuit of Clan Ean’ by sea, and a force being set up to attack them on land, the MacIains manage to survive, taking refuge in the wild lands of northern Ardnamurchan and the Small Isles.

1625 The Earl of Argyll receives a charter from James VI confirming him in possession of the barony of Ardnamurchan. Many MacIains have settled in Moidart under Clanranald, some have adhered to Cameron of Locheil, others have migrated.

1626 The MacIains have ceased to exist as a territorial family. Alexander MacIain receives compensation from the Crown and retires to London.

1633 Donald Campbell makes a complaint against the MacIains, and Clanranald is made responsible for their ‘future good behaviour’.

A late 19th century discovery of bones in what is known at MacIains Cave on the north coast of Ardnamurchan is evidence of the death of MacIain women, children and old people at the hands of their Campbell persecutors.

1719 Two graves with this date, discovered in Kingussie, are said to be those of Alexander MacDonald, father and son, “Sometime representing the ancient family of Ardnamourach.”

A booklet, Clan MacIain, The MacDonalds of Ardnamurchan, is available, price £5.00